Side-blotched lizards in most of the Mojave Desert have tan and brown markings that blend in well with their desert surroundings. On the Pisgah Lava Flow, however, one finds a very different population of side-blotched lizards, as black as the rocks they live on.

How do animals invade new environments different from the ones for which evolution has equipped them with finely tuned adaptations? Light-colored lizards on a lava flow should be easy picking for predators, so how did they survive long enough to evolve darker coloration?

One explanation has been that many of an animal's traits are not fixed, but can change during its lifetime. This "phenotypic plasticity" enables individual animals to alter their appearance or behavior enough to survive in a new environment. Eventually, new adaptations promoting survival arise in the population through genetic changes and natural selection, which acts on the population over generations. This is known as the "Baldwin effect" after the psychologist James Mark Baldwin, who presented the idea in a landmark paper published in 1896.

Scientists studying the side-blotched lizards on the Pisgah Lava Flow have now documented this process in meticulous detail. They showed how individual lizards can change colors in a new environment to become darker on lava; they identified genes that regulate coloration and that differ between populations on and off the lava; and they found that the genetic changes in the population adapted to the lava flow make those lizards darker than others. Their findings, published September 6 in Current Biology, may be the most detailed example of the Baldwin effect occurring in a wild population.

"It's an old and very powerful idea, and now we have genetic evidence of how it happens in the wild," said coauthor Barry Sinervo, professor of ecology and evolutionary biology at UC Santa Cruz.

Sinervo has been studying side-blotched lizards in California for more than 30 years. First author Ammon Corl, who earned his Ph.D. in Sinervo's lab, is now at UC Berkeley's Museum of Vertebrate Zoology. Corl said he first learned of the Pisgah lizard population from an unpublished Ph.D. thesis by coauthor Claudia Luke, now at Sonoma State University.

"Claudia figured out how plastic their coloration is, and I tested for genetic changes that affected coloration in the Pisgah population," Corl said. "Baldwin predicted that plasticity allows organisms to colonize new environments, and they then develop new adaptations through natural selection. Until now, however, we have lacked the genetic tools to show this is going on in a field setting."

When researchers move side-blotched lizards from one background to another (for example, from sand to lava rock), changes in coloration start to appear within a week, and gradual changes in coloration continue for months afterwards. "It seems like there's a slow, gradual build-up of the dark melanin pigment," Corl said.

The researchers cross-bred lizards from the two populations, raised the offspring in a common environment, and measured coloration of the offspring. Those experiments showed that variations in the melanin-related genes correlate with the darkness of the lizards' skins.

"We've studied side-blotched lizards all over, even at another lava flow, and these genetic variants are only found at Pisgah, so we know that's where they arose," Sinervo said. "These are genes that govern coloration by controlling the melanin production pathway, but in a complex way. The Pisgah lizards have the best match to the color of the lava of any population, yet they can still go back to sand and match a completely different background."

The range of coloration possible for an individual lizard is remarkable. "In some ways, it's amazing that natural selection still acts in the presence of so much plasticity. All it takes is a bit of a mismatch and that can make the difference between life and death," Corl said. "There is still variation within the population, so we caught natural selection in the process of acting on these genes. We can now conduct further field and lab studies aimed at better understanding how highly plastic traits are shaped by evolution."

In addition to Corl, Luke, and Sinervo, the coauthors of the paper include Rasmus Nielsen, Ke Bi, Akshara Sree Challa, and Aaron James Stern at UC Berkeley. This work was funded by the University of California and the National Science Foundation. 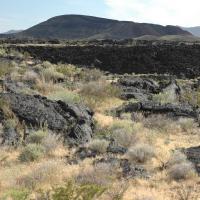