"Smart" materials that change color in response to a mechanical stimulus have a broad range of applications such as creating pressure-sensitive sensors and packaging that can detect tampering.

When the material is first prepared, it is a viscous oil. The oil emits an orange color under ultraviolet irradiation. When the oil is pricked with a needle, however, it randomly crystallizes either into "chiral" yellow crystals that emit green light or into "achiral" whitish-grey crystals that emit bluish-green light.

A crystal is chiral if the molecules are aligned in a way it cannot be superimposed onto its mirror image. This makes your left and right hands chiral, for example, while a soda pop can would be achiral.

The oil also transformed either into chiral or achiral crystals when in contact with small pieces of each crystal respectively. Furthermore, when ultrasonic was applied to the oil for 20 minutes, it turned into a powder of the achiral crystals.

This is the firt such example of this kind of material, they say, and their results indicate that the dynamic change between the two crystal phases may be a promising strategy to design universal mechano-responsive functional materials. "By targeting molecules that can form both chiral and achiral crystals and follow Wallach's Rule, we might be able to develop mechano-responsible materials more strategically and efficiently," Ito added. 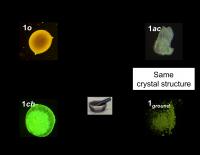