Were ancient bees specialists, devoting their pollen-collecting attentions to very specific plant partners? Or were they generalists, buzzing around to collect pollen from a variety of flowers in their midst? Researchers who've studied an ancient lineage of bees now say in the Cell Press journal Current Biology on November 12 that the answer to both questions is yes. Bees living some 50 million years ago simultaneously relied on both strategies in foraging for pollen.

"Since the fossil record of bees extends to the Late Cretaceous, and an early bee-like ancestor is known from 100 million-year-old amber, it could very well be that this dual foraging behavior may be as old as bees themselves," says Conrad Labandeira of the Smithsonian Institution in Washington, D.C. and a fellow at the Paleontological Society. "If this is the case, then the controversy as to whether the earliest bees were generalist or specialist pollen collectors may be moot: the earliest bees during the mid-Cretaceous may have been simultaneously generalists and specialists!"

The researchers, led by Heisenberg Fellow of the German Science Foundation Torsten Wappler from the University of Bonn in Germany, identified pollen found on the bodies of eleven individuals from six bee species of the tribe Electrapini collected from two sites in Germany. The bee specimens were 44 to 48 million years old, with pollen well preserved across their bodies.

The researchers found pollen from a wide variety of nectar-producing flower types all across the bees' bodies--except, that is, on their legs. Pollen on the bees' hind legs came from a much narrower range of flower types, which the bees packed carefully into pollen baskets. That pollen was eventually taken to feed young bees back at the hive.

"Pollen retrieved by the second, specialized mode represented flowers that were considerably more morphologically stereotyped than the first mode and originated from only three or four major taxa of plants, unlike the considerably greater, more diverse spectrum of plants of the generalist mode that formed the pollination mutualism," Wappler explains.

The findings suggest that examples of one-for-one pollination--think yuccas and yucca moths or figs and fig wasps--are probably quite rare in nature.

"It may turn out that generalist pollination strategies in insects may be far more common than previously suggested," Labandeira says. "In the case of bees, the simultaneous presence of generalist and specialist pollen-collection strategies--now documented in deep-time bee and pollen fossils--likely renders the existence of specialist-only pollen collection modes a rare to very rare phenomenon."

They say researchers should now look for validation of the new findings in bee lineages that are even older.

The authors are supported by the German Research Foundation and the Austrian Science Fund. This is contribution 305 of the Evolution of Terrestrial Ecosystems Consortium at the National Museum of Natural History, in Washington, DC, and a contribution of the Division of Entomology, University of Kansas Natural History Museum.

Current Biology (@CurrentBiology), published by Cell Press, is a bimonthly journal that features papers across all areas of biology. Current Biology strives to foster communication across fields of biology, both by publishing important findings of general interest and through highly accessible front matter for non-specialists. For more information please visit http://www.cell.com/current-biology. To receive media alerts for Cell Press journals, contact press@cell.com. 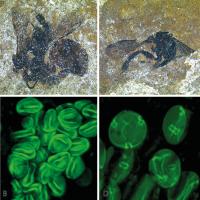 Anciet Bees with Their Pollen Load 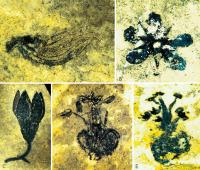 Flowers from the Middle Eocene of Eckfeld