Coral are not completely defenceless against attacking juvenile crown of thorns starfish and can fight back to inflict at times lethal damage, new research has found.

This occurs during a period of the crown of thorns starfish life cycle, where small juveniles shift from a vegetarian diet of algae to coral prey. But this change in diet makes the juveniles more vulnerable to attack by coral.

Population outbreaks of adult crown of thorns starfish, alongside coral bleaching is one of the greatest threats to tropical reef habitats.

Video footage shows when the tube feet (small tube-like projections on the underside of a starfish's arm used for movement) of juvenile crown of thorns starfish reaches out to touch the coral, the entire arm curls back to avoid the corals' defensive stinging cells. To protect themselves, coral polyps have stinging cells in their sweeper tentacles and outer tissue called nematocysts, that are also used to capture food.

The research, published in Marine Ecology Progress Series, was led by Dione Deaker, a PhD student at the University of Sydney, and her supervisor Professor Maria Byrne. The marine scientists say that this is the first study of injury and regeneration in juvenile crown of thorn starfish following damage caused by natural enemies.

The researchers emphasise the results give a fascinating insight into coral behaviour but the behaviour is not enough to protect it from other threats such as human-caused climate change, overfishing and water pollution.

Previous research led by Ms Deaker and Professor Byrne has shown juvenile starfish can survive on algae for more than six years when they were previously thought to change diets at four months old, lying in wait until there is an abundance of coral.

Marine biologists have reported seeing injured juvenile starfish and have suggested that it may be been caused by predators.

"However, seeing it caused by coral came as a complete surprise," said Ms Deaker.

"This shows that the coral use stinging cells as protection to strike back in an attempt to give itself a fighting chance against attacking coral predators."

In the study, Ms Deaker and Professor Byrne, along with colleagues at the national Marine Science Centre, Coffs Harbour, monitored the condition, growth and survival of 37 juvenile crown of thorns in isolation away from potential predators and reared them on a diet of coral prey for over 3 months.

They found coral stings caused injuries that severely reduced the arm length of the starfish by up to 83 percent.

37.8 percent of juveniles were damaged by coral and four juveniles (10.8 percent) with severe injuries did not recover and died.

The sting attacks from the coral also delayed the growth of juveniles, extending the time they need to maintain a vegetarian diet.

The young starfish had a reflex response to being stung when they encountered coral. Their arms recoiled and twisted when their tube feet came into contact with the coral polyps.

"Despite being prey of crown of thorns starfish, coral can potentially influence the survival of juveniles and the appearance of a population outbreak on a reef by delaying their transition into an adult that can reproduce."

Armed with these observations, the study shows that coral are a risky food choice for young crown of thorns starfish.

Although coral injury was able to slow down the growth of the juvenile starfish, their ability to regenerate shows the resilience of this reef predator as a highly prolific species.

Professor Byrne said: "The importance of this study in showing the disconnect between size and age of the juveniles reinforces how challenging it is to understand the dynamics of adult population replenishment."

Revealed: Coral fights back against crown of thorns starfish 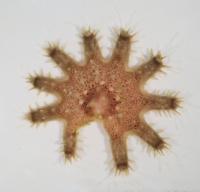