Many subalpine lakes may look beautiful and even pristine, but new evidence suggests they may also be contaminated with potentially hazardous plastics. Researchers say those tiny microplastics are likely finding their way into the food web through a wide range of freshwater invertebrates too.

The findings, based on studies of Italy's Lake Garda and reported on October 7th in Current Biology, a Cell Press publication, suggest that the problem of plastic pollution isn't limited to the ocean.

"Next to mechanical impairments of swallowed plastics mistaken as food, many plastic-associated chemicals have been shown to be carcinogenic, endocrine-disrupting, or acutely toxic," said Christian Laforsch of the University of Bayreuth in Germany. "Moreover, the polymers can adsorb toxic hydrophobic organic pollutants and transport these compounds to otherwise less polluted habitats. Along this line, plastic debris can act as vector for alien species and diseases."

The researchers chose Lake Garda as a starting point for investigating freshwater contamination with micro- and macroplastics because they expected it to be less polluted given its subalpine location. What they found was a surprise: the numbers of microplastic particles in sediment samples from Lake Garda were similar to those found in studies of marine beach sediments.

The size ranges of microplastics found by Laforsch's team suggested that they might find their way into organisms living in the lake. Indeed, the researchers showed that freshwater invertebrates from worms to water fleas will ingest artificially ground fluorescent microplastics in the lab.

The findings in Lake Garda come as bad news for lakes generally, with uncertain ecological and economic consequences.

The public can do its part by putting trash where it belongs. The shape and type of plastic particles found in the study indicate that they started as larger pieces of plastic, most likely originating from post-consumer products.

Plastic waste is a hazard for subalpine lakes too

The Freshwater Crustacean <i>D. magna</i> with Microplastic Particles in the Digestive Tract 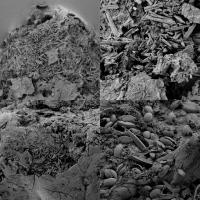