Tropical Depression 7E formed on Sunday, August 6 at 5 p.m. EDT about 90 miles (145 km) east-northeast of Cabo Gracias A Dios, located on the Nicaragua and Honduras border.

On August 6 the Visible Infrared Imaging Radiometer Suite (VIIRS) instrument aboard NASA-NOAA's Suomi NPP satellite provided a visible image of Tropical Depression 7E. At that time, the developing depression was located in the Caribbean Sea and moving toward the west.

By 12 p.m. EDT (1600 UTC) on August 7, NOAA's GOES-East satellite took a visible light image of Tropical Storm Franklin as it approached the Yucatan Peninsula of Mexico. Visible and microwave satellite imagery showed that Franklin's cloud pattern was becoming better organized with banding features starting to appear. The National Hurricane Center (NHC) noted that inner-core convection is not very abundant over the southwest quadrant and the center is still estimated to be located near the southwest edge of the main cloud mass.

NOAA manages the GOES series of satellites, and NASA uses the satellite data to create images and animations.

At 11 a.m. EDT (1500 UTC), the center of Tropical Storm Franklin was located near 17.7 degrees north latitude and 85.1 degrees west longitude. That's about 205 miles (330 km) east of Belize City, Belize and about 215 miles (350 km) east-southeast of Chetumal, Mexico. Franklin was moving toward the west-northwest near 14 mph (22 kph), and the NHC said that general motion is expected to continue over the next 48 hours. On the forecast track, the center of Franklin will be near the east coast of the Yucatan peninsula by this evening. Franklin is then expected to move across the Yucatan Peninsula tonight and on Tuesday.

Maximum sustained winds are near 60 mph (95 kph) with higher gusts. The National Hurricane Center said that strengthening is forecast until the center reaches the east coast of the Yucatan peninsula, and Franklin could be near hurricane strength by the time landfall occurs this evening or tonight. Some weakening is likely while the system moves across the Yucatan Peninsula on Tuesday, August 8.

For updates on Franklin, visit: http://www.nhc.noaa.gov. 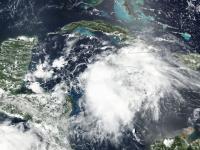