Compared with traditional display technologies, organic light-emitting diodes (OLEDs) have many advantages, such as high contrast, colorful, large viewing angle, light weight, flexible, and so on. Up to now, OLEDs have been successfully commercialized in the niche display market and are now under intense research for other applications, such as solid-state lighting.

During the past three decades, fluorescence, phosphorescence, thermally activated delayed fluorescence (TADF), and organic radical materials have been subsequently applied as emitters because of the pursuit of high efficiency, long-term stability, and low-cost OLEDs. As a new type of emitter in OLEDs, cerium(III) complexes have many potential advantages. First, the authors propose that the theoretical exciton utilization efficiency (EUE) could be as high as 100% since the cerium(III) complex shows a doublet 5d-4f transition from the single electron of the centre cerium(III) (4f1 configuration) ion rather than a singlet and/or triplet transition, which will not be limited by spin-statistics. Second, cerium(III) complexes are expected to be more stable in OLEDs since their excited-state lifetimes are generally tens of nanoseconds. Third, cerium(III) complexes are inherent blue or ultraviolet emitters, as demonstrated in the literature, although their emission colours could be theoretically affected by the ligand field. Moreover, cerium(III) complexes are inexpensive because the abundance of cerium in Earth's crust is 0.006 wt%, which is four orders of magnitude higher than that of iridium (0.0000001 wt%) and even slightly higher than that of copper (0.005 wt%). Hence, the cerium(III) complex has the potential to develop deep-blue OLEDs with high efficiency, long-term stability, and low cost.

The complex Ce-1 was synthesized by stirring potassium hydrotris(3,5-dimethylpyrazolyl)borate (KTpMe2) with Ce(CF3SO3)3 in tetrahydrofuran (THF), accompanied by hydrolysis due to a trace amount of water in the solvent (Figure 1). Through the chelating coordination of the two multidentate rigid ligands, the central cerium(III) ion is effectively protected from the influence of environmental quenching (Figure 1). Ce-1 powder emits deep-blue light, and the spectrum shows the typical double-peak emission of cerium(III) ions with an excited-state lifetime of 42 nanoseconds. The PLQY of its powder is as high as 82%.

As for the electroluminescence property of Ce-1, this article first uses the bipolar BCPO as the host material (Figure 2). Through testing the PLQY and the orientation ratio of the emitting layer (BCPO:Ce-1), and the EQE of the device, the EUE of Ce-1 in the device is deduced to be as high as 100%. Subsequently, this article employs the TSPO1:CzSi as host material to greatly increase the PLQY of the doped film to 93%, and finally the maximum EQE of the optimized device reaches 14% with the maximum brightness of 1008 cd m-2 (Figure 2). The Commission Internationale de L'Eclairage (CIE) coordinates of this device are (0.146, 0.078).

In this paper, the mechanisms of photoluminescence and electroluminescence are also studied. First, the electron paramagnetic resonance (EPR) spectroscopy of Ce-1 powder confirmed that Ce-1 is paramagnetic. Density functional theory (DFT) calculations also show that the donor and acceptor for the first symmetry allowed transition were recognized as the 4f and 5d orbitals of the central cerium(III) ion. The excited-state lifetime of tens of nanoseconds and the double emission peak with an energy difference of ~2000 cm-1 also indicate that the deep-blue light comes from the doublet 5d-4f transition of the cerium(III) ion. By comparing the electroluminescence spectrum of the device with the photoluminescence spectrum of the corresponding doped film, and the transient electroluminescence spectrum, it is deduced that the recombination of carriers occurs on the Ce-1 complex instead of the host material. On the basis of further analysis of the turn-on voltage of the device and the bandgap between the ligand and the central ion, this paper concludes that the cerium(III) ions can directly capture electrons/holes to form doublet excitons and emit deep-blue light (Figure 3). 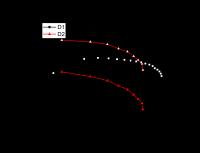