Although clearly discernible in the embryo, shortly afterwards it fuses with other bones beyond recognition. Consequently, researchers have often missed it. Now, however, paleontologists from the University of Zurich have rediscovered it: the "os interparietale," a skull bone also referred to as the interparietal. Using imaging methods, they were able to detect its presence in all mammals -- including humans, which is new as it was previously believed to have been lost in the course of evolution.

The mammalian skull, including that of people, is composed of about 20 bones. Fish, reptile and bird skulls, however, have considerably more. After all, when mammals evolved from reptile-like vertebrates 320 million years ago, the skull's structure became simplified during its development and the number of skull bones decreased.

Some bones were lost in the lineage leading to mammals in the course of evolution, especially a number of skull roof bones. The skull's interparietal, which is one of the skull roof bones, particularly puzzled researchers: on the one hand, it seems to have survived, such as in humans, carnivores and ungulates (especially horses); on the other hand, it is not found in all mammals.

Together with a colleague from the University of Tübingen, Marcelo Sánchez, a professor of paleontology at the University of Zurich, and post-doctoral student Daisuke Koyabu have now detected the presence of the interparietal after all: Studying fossils and embryos of over 300 species of vertebrate, they were able to identify the bone in all of them. They used non-invasive micro-CT imaging to analyze rare embryos of different species from museum collections. "The interparietal was clearly discernible in specimens from the embryonic period as the skull bones were fused less strongly here," explains Sánchez. At the same time, he sees the fact that the bone is only clearly and easily discernible in the embryonic period as the reason why previous researchers failed to recognize it: "It would seem that many anatomists have overlooked the presence of the interparietal in numerous mammalian lineages as the bone becomes fused to other skull bones during growth and is unrecognizable in adult individuals."

Another result that also refutes previous assumptions concerns the origin of the bone. As Koyabu reports: "Whilst it was previously assumed that the mammalian interparietal was composed of two elements, we discovered that it develops from four elements: a medial and a lateral pair."

The tabular bones of our reptile-like ancestors and fish correspond to the lateral interparietal bones, which were overlooked until now. According to the new results, however, they have survived in mammalian lineages after all.

The results also explain the mixed evolutionary tissue origin of the interparietal complex, which had been identified in mice but could not be confirmed by conventional anatomical tests: Genetic studies have revealed that the lateral bone pair develops from the mesoderm, but the medial pair from the neural crest cells.

This present study provides a conclusive explanation for the hitherto inexplicable mixed tissue origin of the interparietal complex: It stems from the evolutionary fusion of the os interparietale to the tabular bones in mammalian lineages.

The study also yields insights into us people, as Sánchez concludes: "The evidence of the continuation of fish bones in mammals provides new insights into the origins of our own anatomy." These anatomical discoveries were made possible thanks to a microtomographic imaging, the museum collections of rare animal embryos and the interdisciplinary collaboration between paleontology and embryology. 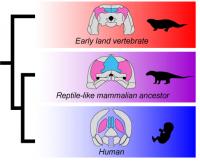 Evolution of Interparietal and Tabular Bones (1 of 2) 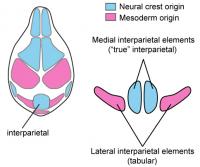 Evolution of Interparietal and Tabular Bones (2 of 2)