BOSTON — A new type of electrical generator uses bacterial spores to harness the untapped power of evaporating water, according to research conducted at the Wyss Institute of Biologically Inspired Engineering at Harvard University. Its developers foresee electrical generators driven by changes in humidity from sun-warmed ponds and harbors.

The prototype generators work by harnessing the movement of a sheet of rubber coated on one side with spores. The sheet bends when it dries out, much as a pine cone opens as it dries or a freshly fallen leaf curls, and then straightens when humidity rises. Such bending back and forth means that spore-coated sheets or tiny planks can act as actuators that drive movement, and that movement can be harvested to generate electricity.

"If this technology is developed fully, it has a very promising endgame," said Ozgur Sahin, who led the study, first at Harvard's Rowland Institute, later at the Wyss Institute, and most recently at Columbia University, where he's now an associate professor of biological sciences and physics. Sahin collaborated with Wyss Institute Core Faculty member L. Mahadevan, who is also the Lola England de Valpine professor of applied mathematics, organismic and evolutionary biology, and physics at the School of Engineering and Applied Sciences at Harvard University, and Adam Driks, a professor of microbiology and immunology at Loyola University Chicago Stritch School of Medicine. The researchers reported their work yesterday in Nature Nanotechnology.

Water evaporation is the largest power source in nature, Sahin said. "Sunlight hits the ocean, heats it up, and energy has to leave the ocean through evaporation," he explained. "If you think about all the ice on top of Mt. Everest – who took this huge amount of material up there? There's energy in evaporation, but it's so subtle we don't see it."

But until now no one has tapped that energy to generate electricity.

As Sahin pursued the idea of a new humidity-driven generator, he realized that Mahadevan had been investigating similar problems from a physical perspective. Specifically, he had characterized how moisture deforms materials, including biological materials such as pine cones, leaves and flowers, as well as man-made materials such as a sheet of tissue paper lying in a dish of water.

Sahin collaborated with Mahadevan and Driks on one of those studies. A soil bacterium called Bacillus subtilis wrinkles as it dries out like a grape becoming a raisin, forming a tough, dormant spore. The results, which they reported in 2012 in the Journal of the Royal Society Interface, explained why.

Unlike raisins, which cannot re-form into grapes, spores can take on water and almost immediately restore themselves to their original shape. Sahin realized that since they shrink reversibly, they had to be storing energy. In fact, spores would be particularly good at storing energy because they are rigid, yet still expand and contract a great deal, the researchers predicted.

"Since changing moisture levels deform these spores, it followed that devices containing these materials should be able to move in response to changing humidity levels," Mahadevan said. "Now Ozgur has shown very nicely how this could be used practically."

When Sahin first set out to measure the energy of spores, he was taken by surprise.

He put a solution thick with spores on a tiny, flexible silicon plank, expecting to measure the humidity-driven force in a customized atomic force microscope. But before he could insert the plank, he saw it curving and straightening with his naked eye. His inhaling and exhaling had changed the humidity subtly, and the spores had responded.

"I realized then that this was extremely powerful," Sahin said.

In fact, simply increasing the humidity from that of a dry, sunny day to a humid, misty one enabled the flexible, spore-coated plank to generate 1000 times as much force as human muscle, and at least 10 times as much as other materials engineers currently use to build actuators, Sahin discovered. In fact, moistening a pound of dry spores would generate enough force to lift a car one meter off the ground.

To build such an actuator, Sahin tested how well spore-coated materials such as silicon, rubber, plastic, and adhesive tape stored energy, settling on rubber as the most promising material.

Then he built a simple humidity-driven generator out of LegosTM, a miniature fan, a magnet and a spore-coated cantilever. As the cantilever flips back and forth in response to moisture, it drives a rotating magnet that produces electricity.

Sahin's prototype captures just a small percentage of the energy released by evaporation, but it could be improved by genetically engineering the spores to be stiffer and more elastic. Indeed, in early experiments, spores of a mutant strain provided by Driks stored twice as much energy as normal strains.

"Solar and wind energy fluctuate dramatically when the sun doesn't shine or the wind doesn't blow, and we have no good way of storing enough of it to supply the grid for long," said Wyss Institute Founding Director Don Ingber, M.D., Ph.D. "If changes in humidity could be harnessed to generate electricity night and day using a scaled up version of this new generator, it could provide the world with a desperately needed new source of renewable energy."

For more on the potential of this spore-containing actuator and generator, see this short animation.

The work was funded by the U.S. Department of Energy, the Rowland Junior Fellows Program, and the Wyss Institute for Biologically Inspired Engineering at Harvard University. In addition to Sahin, Driks and Mahadevan, the authors included Xi Chen, a postdoctoral research associate at Columbia University.

About the Wyss Institute for Biologically Inspired Engineering at Harvard University

Getting a charge from changes in humidity 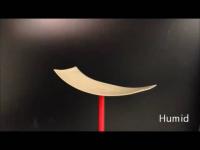