Human activities like the burning of coal and fossil fuels have caused CO2 to accumulate in the atmosphere, which has significantly affected the Earth's climate. As a result, several scientists are looking for ways to convert CO2 into other valuable organic products, such as 1-butanol, which has shown promise as an alternative fuel for vehicles. This could help reduce our dependence on fossil fuels.

One method of obtaining useful compounds is by the electrochemical reduction reaction (CO2RR). Researchers have developed metal-based catalysts that can fulfill this task. However, there is a caveat: most of these catalysts are expensive and produce a variety of products during the reaction, which can be difficult to separate.

To solve this problem, a team of researchers led by Prof. Dr. Jaeyoung Lee and comprising Mr. Minjun Choi, Dr. Jin Won Kim, and Prof. Sungyool Bong from the Gwangju Institute of Science and Technology in South Korea came up with a procedure that directly generates 1-butanol with the help of copper phosphide (CuP2) without first undergoing CO dimerization. "We are trying to develop a Cu-based electrode for electrochemical conversion of CO2 that avoids *CO dimerization and can help us increase the selectivity of the product so that additional power consumption from separation processes can be avoided," explains Mr. Minjun Choi, a Ph.D. student at the university and the paper's first author. Their research has recently been published in volume 6 (issue 6) of the journal ACS Energy Letters on 11 June 2021 and has been available online since 11 May 2021.

Even though numerous copper-based electrocatalysts exist today, this is among the first instances in which CuP2 has been used to develop an electrocatalyst that is highly product-selective. It induces a C-C coupling reaction and circumvents the formation of CO, which is known to be a critical intermediate for Cu-based systems. The researchers confirmed this by using surface-enhanced infrared absorption spectroscopy to show that their CuP2 electrocatalyst yielded the desired product, 1-butanol, with a remarkably high Faradaic efficiency of >3%.

The team is excited about the implications of their findings. "Our goal is to design new electrodes that are stackable, that can increase production rates, and that can promote conversion efficiency so that we can make our goal of converting and using CO2 as a fuel in reality," concludes Prof. Lee.

About the Gwangju Institute of Science and Technology (GIST)

The Gwangju Institute of Science and Technology (GIST) is a research-oriented university situated in Gwangju, South Korea. As one of the most prestigious schools in South Korea, it was founded in 1993 and aims to create a strong research environment to spur advancements in science and technology and to promote collaboration between foreign and domestic research programs. With the motto, "A Proud Creator of Future Science and Technology," GIST has consistently received one of the highest university rankings in Korea.

Mr. Minjun Choi is a Ph.D. student of Electrochemical Reaction and Technology Lab (ERTL). He received a Master's degree in electrochemistry under the supervision of Prof. Dr. Jaeyoung Lee in 2019. His current research focuses on copper-based electrocatalysts for the production of high organic molecules from CO2.

Prof. Dr. Jaeyoung Lee is the vice director of the ERTL Center and is a prominent full professor at the GIST School of Earth Sciences and Environmental Engineering in South Korea. He obtained his doctoral degree (2001) under Prof. Dr. Gerhard ERTL at the FHI der MPG and FU Berlin, Germany. He was a senior scientist at the RIST/POSCO and KIST (2002-2007). His current research interests include fuel cells, water electrolysis, the creation of chemicals from CO2 and ammonia, and AI supported electrochemistry.

Dr. Jin Won Kim is a senior researcher and research assistant professor at the ERTL Center for Electrochemistry and Catalysis at the Gwangju Institute of Science and Technology (GIST). He is currently developing next-generation secondary batteries, such as all solid state batteries and lithium-sulfur batteries. CO2 electrolysis is also one of his research interests. In 2015, Jin Won Kim received a PhD in Environmental Science and Engineering from GIST.

Prof. Sungyool Bong is a research associate professor at the ERTL center for Electrochemistry and Catalysis at the Gwangju Institute of Science and Technology (GIST). His research is currently on fuel cells, CO2 conversion, and chemical energy conversion. In 2010, Sungyool Bong received a PhD in Chemistry from the Seoul National University. 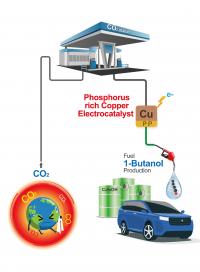