The microscopic algae, known as dinoflagellates, were engulfed by cells cultured from the stony coral, Acropora tenuis, the scientists reported in the journal Frontiers in Marine Science.

"Dinoflagellates are crucial for keeping coral healthy and alive," said Professor Noriyuki Satoh, senior author of the study and head of the Marine Genomics Unit at the Okinawa Institute of Science and Technology Graduate University. "Coral cells take up the algae and provide them with shelter and the building blocks for photosynthesis. In return, the algae provide the corals with nutrients that they synthesize."

However, in recent decades, this essential relationship has been placed under strain. Driven by pollution, acidification and rising ocean temperatures, stressed coral cells are expelling the microscopic and colorful algae in mass bleaching events, resulting in huge swathes of dead, white reefs.

Stony coral from the Acroporidae family - the most common type of coral found within tropical and subtropical reefs - are particularly susceptible to these bleaching events. These fast-growing corals lay down calcium carbonate skeletons and therefore play a key role in building coral reefs.

"For coral reef conservation, it's vital for us to fully understand the partnership between stony coral and the algae that live inside these animals, at the level of a single cell," explained co-first Professor Kaz Kawamura from Kochi University. "But until recently, this was very hard to achieve."

Coral cells are notoriously difficult to culture, so previously scientists had to rely on experimental systems of other closely related marine creatures, like sea anemones, to study the mechanism of how the dinoflagellates enter and leave cells.

It wasn't until April 2021 that the research team made a major leap forward, reporting in Marine Biotechnology that they had successfully cultured different cell lines from larvae of the stony coral, Acropora tenuis, in petri dishes.

For this study, the scientists focused on one coral cell line called IVB5. Many of the cells in this line have similar properties to endodermal cells, in terms of their form, behavior and gene activity. Importantly, in whole coral organisms, it is the endodermal cells that engulf the algae.

The scientists added the dinoflagellate, Breviolum minutum, to a petri dish containing the IVB5 coral cells.

Around 40% of the coral cells in the culture quickly formed long, finger-like projections that reached out to contact the dinoflagellates. The algae were then "swallowed" up, in a process taking around 30 minutes.

"It was amazing to see - it was almost a dream!" said Prof. Satoh.

Over the following couple of days, the algae inside the cell were either broken down into fragments or were successfully enclosed into membrane-bound sacs, called vacuoles, within the cells. For the researchers, this hints at how the relationship possibly started millennia ago.

"It may be that originally, the ancestors of coral engulfed these algae and broke them down for food. But then over time, they evolved to use the algae for photosynthesis instead," co-first author, Dr. Satoko Sekida from Kochi University suggested.

The researchers are now using electron microscopes to gain more detailed images of how the coral cells engulf the dinoflagellates. They are also working on genetic experiments to pinpoint which coral genes are involved.

At this stage, the coral cells containing the algae live for around a month before dying. In the near future, the team hope to achieve a stable culture where both the coral cells and dinoflagellates can reproduce together.

"This would be very exciting as then we can ask new questions, like how the corals react when placed under stress," said Prof. Satoh. "This could give us a more complete understanding of how bleaching occurs, and how we can mitigate it." 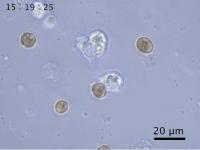