COLUMBIA, Mo. – Beetles: it's what's for breakfast—at least for the red widow spider of Florida's "scrub" habitat, according to a study by University of Missouri biologist James Carrel. The study provides a first glimpse at the diet of this mysterious spider, revealing that it primarily preys upon species of scarab beetles common to the scrub habitat. Carrel's findings shed light on red widow spiders' restriction to the Florida scrub habitat and the need for habitat conservation efforts.

"The pine scrub habitat, found on sandy ridges in Central and Southeastern Florida, is one of the oldest in North America," said Carrel, Curators Professor Emeritus in the MU Division of Biological Sciences. "Many of the plants and animals found on these ridges, including the red widow spider, are restricted to these high, dry areas. Our research suggests that red widows have evolved to specialize on scarab beetles because they are reliable food sources."

Carrel said that red widow spiders are difficult to study due to habitat confinement and the hidden nature of their webs, which are built in palmetto shrubs. Red widows conceal their funnel-shaped retreats in unopened palmetto leaves, making them difficult to spot. The only clues to the spiders' presence, visible solely on foggy mornings during four months of the year, are the threads spun loosely between tips of palmetto frond.

Since 1987, Carrel has been monitoring populations of this spider at the Archbold Biological Station, which protects a 5,193-acre Florida scrub preserve near Lake Placid. Only twice in those 23 years – in March 1989 and in May 2003 – have enough webs been located to study the dietary habits of these elusive spiders. The scientists identified 43 species of insects among the 98 specimens collected. The study revealed that the primary prey of the spider, especially in early spring, are five species of scarab beetles endemic to the Florida scrub habitat.

"The scarab beetles, which often are larger and stronger than the spiders themselves, fly just above the tops of scrub vegetation," said Mark Deyrup, senior research biologist for the Archbold Biological Station, who co-authored the study. "Sometimes beetles hit the web strands between tips of palmetto fronds and tumble into the denser tangle of threads below, catching them in the red widows' webs."

Carrel has monitored red widow spider populations at the Station since 1987, but has found enough webs to study red widows' dietary habits only twice. During both time periods, Carrel worked alongside Deyrup to collect and identify prey from spiders' webs.

Carrel's study, entitled "Red widow spiders prey extensively on scarab beetles endemic in Florida scrub," appeared in the March issue of the Florida Entomologist. Funding for the study came in part from a grant from the University of Missouri in Columbia, MO. 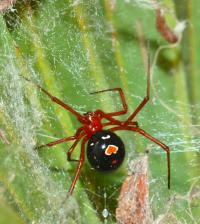