The back of a tiger could have been a blank canvas. Instead, nature painted the big cat with parallel stripes, evenly spaced and perpendicular to the spine. Scientists don't know exactly how stripes develop, but since the 1950s, mathematicians have been modeling possible scenarios. In Cell Systems on December 23, Harvard researchers assemble a range of these models into a single equation to identify what variables control stripe formation in living things.

"We wanted a very simple model in hopes that it would be big picture enough to include all of these different explanations," says lead author Tom Hiscock, a PhD student in Sean Megason's systems biology lab at Harvard Medical School. "We now get to ask what is common among molecular, cellular, and mechanical hypotheses for how living things orient the directions of stripes, which can then tell you what kinds of experiments will (or won't) distinguish between them."

Stripes are surprisingly simple to model mathematically (and much of the early work on the subject was by Alan Turing of "The Imitation Game" fame). These patterns emerge when interacting substances create waves of high and low concentrations of, for example, a pigment, chemical, or type of cell. What Turing's model doesn't explain is how stripes orient themselves in one particular direction.

Hiscock's investigation focused on orientation--e.g., why tiger stripes are perpendicular to its body while zebrafish stripes are horizontal. One surprise from his integrated model is that it takes only a small change to the model to switch whether the stripes are vertical or horizontal. What we don't know is how this translates to living things--so, for a tiger, what is the variable that pushes the development of perpendicular stripes?

"We can describe what happens in stripe formation using this simple mathematical equation, but I don't think we know the nitty-gritty details of exactly what molecules or cells are mapping the formation of stripes," Hiscock says. Genetic mutants exist that can't form stripes or make spots instead, such as in zebrafish, but "the problem is you have a big network of interactions, and so any number of parameters can change the pattern," he adds.

His master model predicts three main perturbations that can affect how stripes orient: one is a change in "production gradient," which would be a substance that amplifies stripe pattern density; second is a change in "parameter gradient," a substance that changes one of the parameters involved in forming the stripe; and the last is a physical change in the direction of the molecular, cellular, or mechanical origin of the stripe.

Although this paper is based in theory, Hiscock believes that we are close to having the experimental tools that can decipher whether the math holds true in living systems.

The work was supported by the National Institutes of Health and the Herchel Smith Graduate Fellowship.

A mathematical model for animal stripes 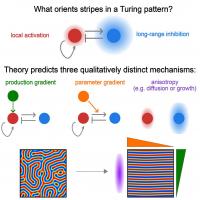 What Orients Stripes in a Turing Pattern?