Most female frogs don’t call; most lack or have only rudimentary vocal cords. A typical female selects a mate from a chorus of males and then –silently – signals her beau. But the female concave-eared torrent frog, Odorrana tormota, has a more direct method of declaring her interest: She emits a high-pitched chirp that to the human ear sounds like that of a bird.

This is one of several unusual frog-related findings reported this week in the journal Nature.

O. tormota lives in a noisy environment on the brushy edge of streams in the Huangshan Hot Springs, in central China, where waterfalls and rushing water provide a steady din. The frog has a recessed eardrum, said Albert Feng, a professor of molecular and integrative physiology at the University of Illinois and team leader on the new study.

“In the world we know of only two species – the other one in southeast Asia – that have the concave ear,” Feng said. “The others all have eardrums on the body surface.”

Earlier studies, conducted by Feng, Jun-Xian Shen at the Institute of Biophysics at the Chinese Academy of Sciences and Peter Narins at the University of California, Los Angeles, found that O. tormota males emit – and respond to – unusual chirping calls from other males. These calls are audible, but also have energy in the ultrasonic range. The recessed ear structure protects an eardrum that is 1/30 the thickness of that of a normal frog, allowing it to detect very high frequency sounds.

The unusual ear structure and the high-pitched calls are likely an evolutionary adaptation to the noisy environment, Feng said. The waterfalls and streams produce a steady racket predominantly in a lower frequency range than that used by the frogs.

Laboratory experiments showed that the frogs could hear most of the audible and ultrasonic frequencies emitted by other O. tormota frogs. The only other animals known to use ultrasonic communication are bats, dolphins, whales and some insects.

The calls are quite complex. A single O. tormota frog broadcasts its message over several frequencies at once, at harmonic intervals, like a chord strummed simultaneously on several strings.

The new analysis, conducted by Shen, Feng and Narins, found that female O. tormota frogs also emit a call that spans audible and ultrasonic frequencies. The team has not observed females vocalizing in the wild (these frogs are nocturnal and can leap up to 30 times their body length), but in laboratory settings the females emitted calls only when they were carrying eggs.

Male O. tormota frogs exposed to recorded female calls were quite responsive, usually chirping within a small fraction of a second.

“The frog’s response is instantaneous – right after the stimulus,” Feng said.

In the laboratory, the males usually chirped and then leapt directly at the source of the female call. Their ability to home in on the sound call was astonishingly precise, Feng said. A typical male could leap toward the sound with an accuracy of over 99 percent.

“This is just unheard of in the frog kingdom,” he said.

Only elephants, humans, barn owls and dolphins are known to detect sound with similar precision. The small distance between the frog’s ears (about one centimeter) makes its ability to localize the sound that much more impressive, Feng said.

How the female picks a mate in the wild is still unknown, however.

“We have a lot of work to do to figure out whether she directs the signal to one male or whether she lets a bunch of males come and compete, or whether there is any kind of dueting session during which she then decides: ‘OK, You’re my guy. Hop on my back and I’ll take you to the creek!’” Feng said.

These studies likely have implications for human health. Earlier research into the mechanics of frog hearing and directional hearing helped Feng and his colleagues at the U. of I.’s Beckman Institute for Advanced Science and Technology design an “intelligent” hearing aid that boosts sound signals of interest embedded in other sounds in the immediate environment of the listener.

EMBARGOED FOR RELEASE UNTIL 12 NOON CDT (US) MAY 11 (SUNDAY) 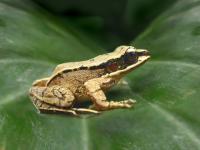 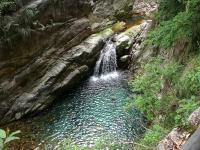