Did the Bible's King David and his son Solomon control the copper industry in present-day southern Jordan? Though that remains an open question, the possibility is raised once again by research reported in the Proceedings of the National Academy of Sciences.

Led by Thomas Levy of UC San Diego and Mohammad Najjar of Jordan's Friends of Archaeology, an international team of archaeologists has excavated an ancient copper-production center at Khirbat en-Nahas down to virgin soil, through more than 20 feet of industrial smelting debris, or slag. The 2006 dig has brought up new artifacts and with them a new suite of radiocarbon dates placing the bulk of industrial-scale production at Khirbat en-Nahas in the 10th century BCE – in line with biblical narrative on the legendary rule of David and Solomon. The new data pushes back the archaeological chronology some three centuries earlier than the current scholarly consensus.

The research also documents a spike in metallurgic activity at the site during the 9th century BCE, which may also support the history of the Edomites as related by the Bible.

Khirbat en-Nahas, which means "ruins of copper" in Arabic, is in the lowlands of a desolate, arid region south of the Dead Sea in what was once Edom and is today Jordan's Faynan district. The Hebrew Bible (or Old Testament) identifies the area with the Kingdom of Edom, foe of ancient Israel.

For years, scholars have argued whether the Edomites were sufficiently organized by the 10th to 9th centuries BCE to seriously threaten the neighboring Israelites as a true "kingdom." Between the World Wars, during the "Golden Age" of biblical archaeology, scholars explored, as Levy describes it, with a trowel in one hand and Bible in the other, seeking to fit their Holy Land findings into the sacred story. Based on his 1930s surveys, American archaeologist Nelson Glueck even asserted that he had found King Solomon's mines in Faynan/Edom. By the 1980s, however, Glueck's claim had been largely dismissed. A consensus had emerged that the Bible was heavily edited in the 5th century BCE, long after the supposed events, while British excavations of the Edomite highlands in the 1970s-80s suggested the Iron Age had not even come to Edom until the 7th century BCE.

"Now," said Levy, director of the Levantine Archaeology Lab at UCSD and associate director of the new Center of Interdisciplinary Science for Art, Architecture and Archaeology (CISA3), "with data from the first large-scale stratified and systematic excavation of a site in the southern Levant to focus specifically on the role of metallurgy in Edom, we have evidence that complex societies were indeed active in 10th and 9th centuries BCE and that brings us back to the debate about the historicity of the Hebrew Bible narratives related to this period."

Khirbat en-Nahas, comprising some 100 ancient buildings including a fortress, is situated in the midst of a large area covered by black slag – more than 24 acres that you can clearly see on Google Earth's satellite imagery. Mining trails and mines abound. The size argues for industrial-scale production at Khirbat en-Nahas, Levy explained. And the depth of the waste at the site, more than 20 feet, he said, provides a "measuring stick" to monitor social and technological change during the Iron Age, which spans around 1200 to 500 BCE, a key period in the histories of ancient Israel and Edom.

The archaeological team, Levy said, used high-precision radiocarbon dating on date seeds, sticks of tamarisk and other woods used for charcoal in smelting (along with Bayesian analysis) to obtain the 10th- and 9th-century BCE dates. The analyses were carried out by Thomas Higham of the University of Oxford.

Additional evidence comes from ancient Egyptian artifacts found at the site. The artifacts, a scarab and an amulet, were in a layer of the excavation associated with a serious disruption in production at the end of the 10th century BCE – possibly tying Khirbat en-Nahas to the well-documented military campaign of Pharaoh Sheshonq I (aka "Shishak" in the Bible) who, following Solomon's death, sought to crush economic activity in the area.

For a comprehensive picture, the researchers marshaled the "the newest and most accurate digital archaeology tools," Levy said: electronic surveying linked to GIS that all but eliminates human error, as well as digital reconstruction of the site in the "StarCAVE," a 3-D virtual environment at UC San Diego's California Institute for Telecommunications and Information Technology.

The present findings, Levy noted, support early results he and his colleagues obtained from digs at Khirbat en-Nahas in 2002 and 2004.

"We can't believe everything ancient writings tell us," Levy said. "But this research represents a confluence between the archaeological and scientific data and the Bible.

"Our work also demonstrates methods that are objective and enable researchers to evaluate the data in a dispassionate way. This is especially important for 'historical archaeologies' around the world where sacred texts – whether the Mahabharata in India or the Sagas of Iceland – and the archaeological record are arenas for fierce ideological and cultural debates."

Future research at Khirbat en-Nahas, Levy said, will focus on who actually controlled the copper industry there – Kings David and Solomon or perhaps regional Edomite leaders (who had not been written about in the biblical texts) – and also on the environmental impacts of all this ancient smelting.

Meanwhile, Levy is working with the Royal Society for the Conservation of Nature in Jordan and other organizations to have Khirbat en-Nahas and the more than 450-square mile ancient mining and metallurgy district declared a UNESCO World Heritage Site, to protect it from possible mining in the future and preserve "its spectacular desert landscape and rare, ancient character." 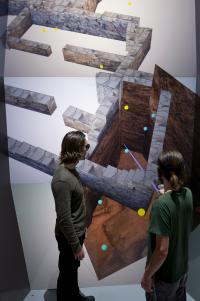