Troy, N.Y. -- Researchers at Rensselaer Polytechnic Institute have developed a new method to bond materials that don’t normally stick together. The team’s adhesive, which is based on self-assembling nanoscale chains, could impact everything from next-generation computer chip manufacturing to energy production.

Less than a nanometer – or one billionth of a meter – thick, the nanoglue is inexpensive to make and can withstand temperatures far higher than what was previously envisioned. In fact, the adhesive’s molecular bonds strengthen when exposed to heat.

The glue material is already commercially available, but the research team’s method of treating the glue to dramatically enhance its “stickiness” and heat resistance is completely new. The project, led by Rensselaer materials science and engineering professor Ganapathiraman Ramanath, is featured in the May 17 issue of the journal Nature.

Like many key scientific discoveries, Ramanath and his team happened upon the novel, heat-hardened nanoglue by accident.

For years Ramanath has investigated ways of assembling layers of molecular chains between two different materials to enhance the structural integrity, efficiency, and reliability of semiconductor devices in computer chips. His team has shown that molecular chains with a carbon backbone – ending with appropriate elements such as silicon, oxygen, or sulfur – can improve adhesion and prevent heat-triggered mixing of atoms of the adjoining substances. Recently, Ramanath’s group and other researchers have found these nanolayers to be useful for creating adhesives, lubricants, and protective surface coatings.

The nanolayers, however, are extremely susceptible to heat and begin to degrade or simply detach from a surface when exposed to temperatures above 400 degrees Celsius. This severe limitation has precluded more widespread use of the nanolayers.

Ramanath’s team decided to sandwich a nanolayer between a thin film of copper and silica, thinking the extra support would help strengthen the nanolayer’s bonds and boost its adhesive properties. It proved to be an insightful venture, and the research team found more than it bargained for.

When exposed to heat, the middle layer of the “nanosandwich” did not break down or fall off – as it had nowhere to go. But that was not the only good news. The nanolayer’s bonds grew stronger and more adhesive when exposed to temperatures above 400 degrees Celsius. Constrained between the copper and silica, the nanolayer’s molecules hooked onto an adjoining surface with unexpectedly strong chemical bonds.

“The higher you heat it, the stronger the bonds are,” Ramanath said. “When we first started out, I had not imagined the molecules behaving this way.”

To make sure it wasn’t a fluke, his team recreated the test more than 50 times over the past two years. The results have been consistent, and show heating up the sandwiched nanolayer increases its interface toughness – or “stickiness” – by five to seven times. Similar toughness has been demonstrated using micrometer-thick layers, but never before with a nanometer-thick layer. A nanometer is 1,000 times smaller than a micrometer.

Because of their small size, these enhanced nanolayers will likely be useful as adhesives in a wide assortment of micro- and nanoelectronic devices where thicker adhesive layers just won’t fit.

Another unprecedented aspect of Ramanath’s discovery is that the sandwiched nanolayers continue to strengthen up to temperatures as high as 700 degrees Celsius. The ability of these adhesive nanolayers to withstand and grow stronger with heat could have novel industrial uses, such as holding paint on hot surfaces like the inside of a jet engine or a huge power plant turbine.

Along with nanoscale and high heat situations, Ramanath is confident the new nanoglue will have other unforeseen uses.

“This could be a versatile and inexpensive solution to connect any two materials that don’t bond well with each other,” Ramanath said. “Although the concept is not intuitive at first, it is simple, and could be implemented for a wide variety of potential commercial applications.

“The molecular glue is inexpensive – 100 grams cost about $35 – and already commercially available, which makes our method well-suited to today’s marketplace. Our method can definitely be scaled up to meet the low-cost demands of a large manufacturer,” he said.

Ramanath and his team have filed a disclosure on their findings and are moving forward toward a patent, which will complement the robust portfolio of other intellectual property they hold in this field. The team is also exploring what happens when certain variables of the nanoglue are tweaked, such as making taller nanolayers or sandwiching the layers between substances other than copper and silica.

LaVerne Hess, the NSF program official most familiar with Ramanath’s work, applauded the interdisciplinary nature and strong technical relevance of the nanoglue project.

“It’s a good example of basic materials science research motivated by an understanding of engineering needs in the electronics field, and involving fundamental chemistry concepts to create new materials capabilities to enable progress in a field important to U.S. competitiveness,” Hess said.

Inexpensive 'nanoglue' can bond nearly anything together 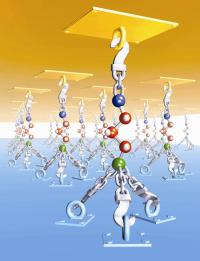