While diabetes rates are on the rise and are having serious effects on millions of people's health, researchers studying grizzly bears have now discovered a natural state of diabetes that serves a real biological purpose and is also reversible. Investigators reporting in the August 5 issue of the Cell Press journal Cell Metabolism note that grizzly bears are obese but not diabetic in the fall, become diabetic only weeks later in hibernation, and then somehow become "cured" of diabetes when they wake up in the spring. The research reveals how natural biology, through evolutionary experimentation, can teach us new things about how animals naturally cope with conditions that would cause disease in humans.

In humans with type 2 diabetes, cells lose the ability to respond to insulin, a hormone that helps regulate the level of sugar in the body. When investigators looked at grizzly bears, they found that, unlike in humans, insulin levels in the animals' blood do not change. Instead, the cells that insulin communicates with turn on and off their ability to respond to insulin. The team also made the surprising discovery that when grizzlies are most obese, they are also the most insulin sensitive (or least diabetic), and they become this way by shutting down the activity of a protein called PTEN in fat cells.

"This is in contrast to the common notion that obesity leads to diabetes in humans," says Dr. Kevin Corbit, of Amgen, Inc. He and his colleagues also found that grizzlies somehow store all of the fuel they need during hibernation in fat tissue, not in liver and muscle, which are common places for fat to accumulate in other animals with obesity.

The findings highlight the complex relationship between obesity and diabetes. "Our results clearly and convincingly add to an emerging paradigm where diabetes and obesity—in contrast to the prevailing notion that the two always go hand-in-hand—may exist naturally on opposite ends of the metabolic spectrum," says Dr. Corbit. "While care must be taken in extrapolating preclinical findings to the care of particular patients, we believe that these and other data do support a more comprehensive and perhaps holistic approach to caring for patients with diabetes and/or obesity," he adds.

Dr. Corbit explains that the cellular mechanisms leading to obesity in certain patients may in fact be the same mechanisms that could be protecting them from diabetes, and the mechanisms leading to diabetes in other patients may also be what protects them from becoming obese. For instance, humans with less PTEN have a very bear-like quality: being exquisitely insulin sensitive even if obese. "Moving forward, this more sophisticated understanding of the relationship between diabetes and obesity should enable researchers not only to develop therapies targeting these mechanisms, but also to identify the appropriate patients to whom these therapies should be targeted." 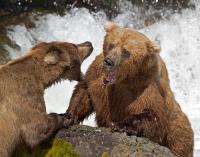 Bears in the Wild