A study examines the potential causes of the 2014-2015 Legionnaires' disease (LD) outbreak in Flint, Michigan. The outbreak constitutes one of the largest LD outbreaks in the United States, and coincided with water source and treatment changes to the system supplying drinking water to Flint. Previous research has pointed to insufficient chlorine levels in water systems as a contributing factor to LD outbreaks. Michele Swanson and colleagues developed a series of statistical tests to evaluate the relationship between free chlorine concentrations and the 2014-2015 LD outbreak in Genesee County, MI, where Flint is located. The tests incorporated data on the free chlorine in the water system from 2013-2016 and LD cases that occurred in Genesee, as well as nearby Wayne and Oakland counties from 2010-2016. The results indicate that the risk of a Flint resident contracting LD increased 6.3 fold following water supply changes in Flint in 2014. Moreover, decreasing concentrations of free chlorine in the water were associated with increased risk of developing LD; the risk increased by 80% per 1 mg/L decrease in free chlorine during the water supply change. According to the authors, the findings uncover links between changes in water quality and the LD outbreak in Flint. 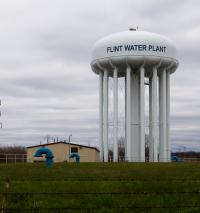