The behaviour of semipalmated sandpipers (Calidris pusilla) feeding during low tide in the Bay of Fundy, New Brunswick, surprised Guy Beauchamp, an ornithologist and research officer at the University of Montreal's Faculty of Veterinary Medicine. While individuals on the periphery remained alert and used short pecks to feed on the mudflats, birds in the middle of the group relaxed their vigilance and fed on a different resource. The more peripheral group members were effectively used as sentinels for the others.

Two observation seasons were needed to confirm this never-before-documented behaviour. The phenomenon attracted the attention of Britain's Royal Society, which has just published the results of Beauchamp's research in the most recent edition of its Biology Letters. "Both foraging modes are easy to distinguish," Beauchamp explained. "In the first case, the birds keep their heads upright while pecking at their food rapidly; they are on the lookout for predators. In the second case, their heads are kept low while they scrape the mud in search of tiny organisms."

Scientists know that living in groups provides individuals with added protection and increases their chances of survival. Beauchamp's discovery provides further information about the precise mechanisms that lead to this advantage. Peripheral birds must be on the lookout for predators (in this case mainly the silhouettes of falcons, which can strike the sandpipers at any moment), allowing the central birds to use different resources. "During their stopover in eastern Canada, sandpipers must optimize their strength to continue their migration. Any advantage helps," Beauchamp said.

It took two sessions of three weeks in the field, in 2011 and 2012, for the biologist to confirm these observations. He observed 466 birds in 43 flocks before drawing his conclusions. They feed on biofilm, which requires a dangerous relaxing of vigilance that is really only possible in the safest part of the group. Biofilm refers to the smorgasbord of diatoms and phytoplankton that sandpipers filter in their beaks in a back-and-forth movement. Their other form of diet consists of amphipods, which the wading birds capture after spotting them visually.

In Beauchamp's field site, north of the Bay of Fundy, New Brunswick, thousands stop over to feed on the tidal mudflats. "This finding provides a novel benefit of living in groups, which may have a broad relevance given that social foraging species often exploit a large array of resources," he explained. Semipalmated sandpipers are a relatively abundant species whose survival does not appear threatened in the short term. This is not the case for all species of shorebirds, some of which suffer greatly from the ecological imbalances caused by global warming. 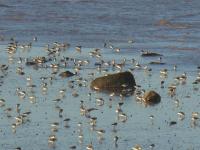