Researchers report that arthropods in the tropics of Puerto Rico have declined significantly since initial measurements in the 1970s. Arthropods, including insects, make up a majority of terrestrial species, providing food, pollination, and other important ecosystem services. Tropical insect species reside in a narrow temperature band and are often exquisitely sensitive to temperature fluctuations. Bradford Lister and Andres Garcia revisited study sites in Puerto Rico's Luquillo rainforest to document the effect of a 2 °C rise in mean maximum temperatures on local arthropod populations. Using methods deployed almost four decades ago, the authors sampled arthropod abundance and diversity with the aid of sweep netting and sticky traps over a two-year period. The authors report that the dry weight of arthropods collected was 10-60 times less than previous measurements, and note that the main driver of the loss of arthropod abundance is the temperature rise associated with climate warming. The authors also documented parallel decreases in insectivorous species. According to the authors, the losses contribute to the collapse of the tropical rainforest's food web. 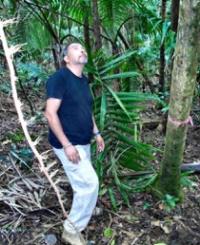