Dr Max Ortiz Catalan at Chalmers University of Technology has developed a novel method of treating phantom limb pain using machine learning and augmented reality. This approach has been tested on over a dozen of amputees with chronic phantom limb pain who found no relief by other clinically available methods before. The new treatment reduced their pain by approximately 50 per cent, reports a clinical study published in The Lancet.

People who lose an arm or leg often experience phantom limb pain, as if the missing limb was still there. Phantom limb pain can become a serious chronic condition that significantly reduces the patients' quality of life. It is still unclear why phantom limb pain and other phantom sensations occur.

Several medical and non-medical treatments have been proposed to alleviate phantom limb pain. Examples include mirror therapy, various types of medications, acupuncture, and implantable nerve stimulators. However, in many cases nothing helps. This was the situation for the 14 arm amputees who took part in the first clinical trial of a new treatment, invented by Chalmers researcher Max Ortiz Catalan, and further developed with his multidisciplinary team in the past years.

"We selected the most difficult cases from several clinics," Dr Ortiz Catalan says. "We wanted to focus on patients with chronic phantom limb pain who had not responded to any treatments. Four of the patients were constantly medicated, and the others were not receiving any treatment at all because nothing they tried had helped them. They had been experiencing phantom limb pain for an average of 10 years."

The patients were treated with the new method for 12 sessions. At the last session the intensity, frequency, and quality of pain had decreased by approximately 50 per cent. The intrusion of pain in sleep and activities of the daily living was also reduced by half. In addition, two of the four patients who were on analgesics were able to reduce their doses by 81 per cent and 33 per cent.

"The results are very encouraging, especially considering that these patients had tried up to four different treatment methods in the past with no satisfactory results," Ortiz Catalan says. "In our study, we also saw that the pain continuously decreased all the way through to the last treatment. The fact that the pain reduction did not plateau suggests that further improvement could be achieved with more sessions."

Ortiz Catalan calls the new method "phantom motor execution". It consist of using muscle signals from the amputated limb to control augmented and virtual environments. Electric signals in the muscles are picked up by electrodes on the skin. Artificial intelligence algorithms translate the signals into movements of a virtual arm in real-time. The patients see themselves on a screen with the virtual arm in the place of the missing arm, and they can control it as they would control their biological arm.

Thus, the perceived phantom arm is brought to life by a virtual representation that the patient can see and control. This allows the patient to reactivate areas of the brain that were used to move the arm before it was amputated, which might be the reason that the phantom limb pain decrease. No other existing treatment for phantom limb pain generates such a reactivation of these areas of the brain with certainty. The research led by Ortiz Catalan not only creates new opportunities for clinical treatment, but it also contributes to our understanding of what happens in the brain when phantom pain occurs.

"Our joint project was incredibly rewarding, and we now intend to go further with a larger controlled clinical trial," Ortiz Catalan says. "The control group will be treated with one of the current treatment methods for phantom limb pain. This time we will also include leg amputees. More than 30 patients from several different countries will participate, and we will offer more treatment sessions to see if we can make the pain go away completely."

The technology for phantom motor execution is available in two modalities - an open source research platform, and a clinically friendly version in the process of being commercialised by the Gothenburg-based company Integrum. The researchers believe that this technology could also be used for other patient groups who need to rehabilitate their movement capability, for example after a stroke, nerve damage or hand injury. 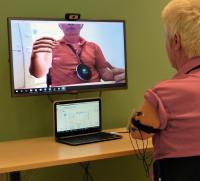 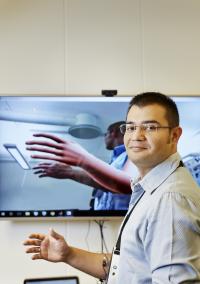