Currently, there is no effective method to predict the prognosis of chronic kidney disease (CKD) patients. Tomonori Kimura and Yoshitaka Isaka, researchers in Department of Nephrology, Osaka University, found that measuring D-amino acids[1], which present only trace in human, provides prognostic information of CKD. The present discovery would facilitate CKD treatment and thus improve the prognosis of CKD, and may also lead to the further discovery of novel therapy. The potential application is not limited to kidney diseases: the disease context ranges to life style-related diseases such as diabetes mellitus and hypertension, as well as lethal diseases including cardiovascular diseases.

Chronic kidney disease (CKD) is a critical health problem. CKD patients are highly-prevalent throughout the world, and the number of end-stage kidney disease (ESKD) patients, who need to receive cost-prohibitive kidney replacement therapy, is increasing year by year. Additionally, the risk of cardiovascular diseases and death increases with the progression of CKD stages. In Japan, the number of ESKD patients receiving kidney replacement therapy is over 320,000, including 30,000 patients who start it every year. Moreover, it was estimated that about 10% of Japanese population have CKD. Thus, it is critical to prevent CKD patients from the progression to ESKD, however, there is no effective methods to predict the progression of CKD.

On the other hand, D-amino acids, the enantiomers[2] of L-amino acids, are increasingly recognized as potential biomarkers in several diseases. Although the amounts of D-amino acids are usually very trace in human and their existence have been overlooked, recent technological advancement enables us to measure D-amino acids simultaneously with high sensitivity at fentomole[3] levels (Figure 2). The research group from Osaka and Kyushu University searched for prognostic biomarkers of CKD through a chiral amino acid metabolic profiling[4].

The research group measured D-amino acids in blood from CKD patients by applying micro-two-dimensional HPLC (2D-HPLC) system[5] developed by Kenji Hamase, Department of Pharmaceutical Science, Kyushu University, and followed their prognoses. 16 out of 21 D-amino acids were detected in blood from CKD patients. Further analyses revealed that D-Serine and D-Asparagine were associated with the progression of CKD (Figure 3); the risk of progression to ESKD was elevated from 2- to 4- fold in those with higher levels of those D-amino acids (Figure 4).

The results of present study will provide the novel method to the clinician which can identify CKD patients at high-risk for progression to ESKD. The information of D-amino acids would enable to select the best treatment for individual person, as well as the discovery of novel therapy. This method is also applicable to such diseases as life style-associated diseases (diabetes mellitus and hypertension) and cardiovascular diseases, as the prognoses of these diseases are strongly influenced by CKD progression.

Discovery of biomarkers for the prognosis of chronic kidney disease 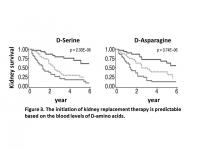 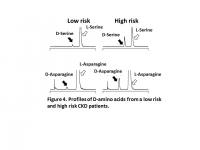