New research reveals how biological arms races between cuckoos and host birds can escalate into a competition between the host evolving new, unique egg patterns (or 'signatures') and the parasite new forgeries.

Brood parasitic birds such as cuckoos lay eggs that mimic those of their hosts in an effort to trick them into accepting the alien egg and raising the cuckoo chick as one of their own.

New research from the University of Cambridge has found that different bird species parasitised by the African cuckoo finch have evolved different advanced strategies to fight back.

One strategy is for every host female to lay a different type of egg, with egg colour and pattern varying greatly among nests. These egg 'signatures' make it harder for the cuckoo finch to lay accurate forgeries. Since the female cuckoo finch always lays the same type of egg throughout her lifetime, she cannot change the look of her egg to match those of different host individuals - thus her chances of laying a matching egg are exasperatingly small.

The above film clip shows a nest of the most frequent host of the cuckoo finch, the tawny-flanked prinia, which has an extravagantly diverse range of eggs. The prinia parent has recognised that an egg in its nest is that of a cuckoo finch, and proceeds to eject it by spearing it on the end of its beak and carrying it away.

Dr Claire Spottiswoode, a Royal Society Dorothy Hodgkin Research Fellow from the University of Cambridge's Department of Zoology, said: "As the cuckoo finch has become more proficient at tricking its hosts with better mimicry, hosts have evolved more and more sophisticated ways to fight back. Our field experiments in Zambia show that this biological arms race has escalated in strikingly different ways in different species. Some host species – such as the tawny-flanked prinia – have evolved defences by shifting their own egg appearance away from that of their parasite. And we see evidence of this in the evolution of an amazing diversity of prinia egg colours and patterns.

The researchers also found that some cuckoo finch hosts use an alternative strategy: red-faced cisticolas lay only moderately variable eggs but are instead extremely discriminating in deciding whether an egg is their one of their own. Thanks to their excellent discrimination, these hosts can spot even a sophisticated mimic.

Dr Martin Stevens, a BBSRC David Phillips Research Fellow from the University of Cambridge's Department of Zoology, commented on this aspect of the findings: "Our experiments have shown that these different strategies are equally successful as defences against the cuckoo finch. Moreover, one species that has done a bit of both – the rattling cisticola – appears to have beaten the cuckoo finch with this dual strategy, since it is no longer parasitised. The arms race between the cuckoo finch and its host emphasises how interactions between species can be remarkably sophisticated especially in tropical regions such as Africa, giving us beautiful examples of evolution and adaptation."

Their findings are reported today in the journal Proceedings of the Royal Society of B.

1. The paper 'How to evade a coevolving brood parasite: egg discrimination versus egg variability as host defences' will be published in the 13 April 2011 edition of Proceedings of the Royal Society B.

3. BBSRC is the UK funding agency for research in the life sciences and the largest single public funder of agriculture and food-related research.

Sponsored by Government, in 2010/11 BBSRC is investing around £470 million in a wide range of research that makes a significant contribution to the quality of life in the UK and beyond and supports a number of important industrial stakeholders, including the agriculture, food, chemical, healthcare and pharmaceutical sectors.

The Institutes conduct long-term, mission-oriented research using specialist facilities. They have strong interactions with industry, Government departments and other end-users of their research. 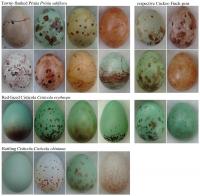