The 'sloshing' of a quantum fluid comprised of light and matter reveals superfluid properties.

An Australian-led team of physicists have successfully created sloshing quantum liquids in a 'bucket' formed by containment lasers.

"These quantum fluids are expected to be as wavy as the oceans, but catching clear pictures of the waves is an experimental challenge," says lead author Dr Eliezer Estrecho.

Led by the Australian National University (ANU), the team serendipitously observed the wavy motion of the quantum fluid in an optically-controlled bucket, gaining new insights of the intriguing superfluid properties of this peculiar, hybrid light-matter system.

Superfluidity is the flow of particles without suffering resistance, and is pursued by FLEET researchers for future applications in ultra low-energy electronics.

FILLING THE BUCKET WITH THE QUANTUM FLUID LED TO SLOSHING

The team performed the experiments in a laser-made 'bucket' that traps particles called exciton-polaritons, which are hybrid light-matter particles in a semiconductor.

As these particles cool down they form a giant quantum object called a Bose-Einstein condensate (sometimes referred to as the fifth state of matter), in which quantum phenomena can be seen on a macroscopic scale.

"The excess energy lost by the cooling particles does not disappear easily so the condensate will display some sort of wavy behaviour, which is random for every realisation of the condensation," says corresponding author Prof Elena Ostrovskaya.

That randomness makes it hard to detect the transient oscillations with the imaging cameras, since it will average out in the experiment.

However, fortuitously, the 'bucket' is tilted.

"In most experiments, we try to avoid the tilt since it complicates the analysis," says Dr Estrecho.

"But in this case the 'annoying' tilt enabled the observation of the oscillation because it is favourable for the condensate to slosh along the tilt direction.

The sloshing oscillation was observed in both the position and momentum of the condensate, beautifully displaying the laws of quantum mechanics at a macroscopic scale that can be seen by an ordinary microscope. However, the oscillations are extremely fast, so that it was only possible to observe them using a camera with a picosecond-scale temporal resolution.

STUDYING THE SPEED OF SOUND IN SUPERFLUIDS

The true beauty of the experiment lies in the analysis of the oscillation frequencies since it is directly related to the speed of sound and can probe the superfluid properties of the quantum fluid. This is especially relevant since this peculiar quantum fluid can exist at room temperature, and hence is promising for device applications.

Using a clever analysis, the team has extracted the speed of sound from the experimental data, and found that it is smaller than expected from prevailing theories. The team argued that the discrepancy arises from the existence of an invisible reservoir of hot matter-like particles that interact with the hybrid light-matter particles.

Initial results show that neither the reservoir particles, finite temperature, or the inherent short lifetime of exciton-polaritons can solely explain the observed damping rates. Hence, further theoretical studies that combine these effects and carefully controlled experiments are needed to better understand the non-equilibrium quantum fluid.

Low-energy collective oscillations and Bogoliubov sound in an exciton-polariton condensate was published as an Editor's Suggestion in Physical Review Letters in February 2021.

The superfluidity probed by the sloshing of the quantum fluid in this study is one candidate physical phenomena in realising a low-energy exciton transistor.

A superfluid is a quantum state in which all particles such as exciton-polaritons flow with the same momentum, and no energy is lost to other motion.

Sloshing quantum fluids of light and matter to probe superfluidity 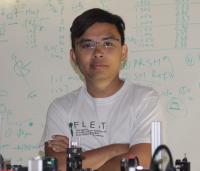