In order to understand the mechanism of nickelates superconductor, scientists at Institute of Physics, Chinese Academy of Science made a carefully analysis on the parent compound NdNiO2, including its electronic band structure, orbital characteristics, Fermi surfaces and band topology by using the first-principles calculations and Gutzwiller variational method. The results show that the electron Fermi pockets are contributed by Ni-3dx2-y2 orbitals, while hole pockets consist of Nd-5d3z2-r2 and Nd-5dxy orbitals (shown in Fig.1). By analyzing elementary band representation in the theory of topological quantum chemistry, authors found that a two-band model can be constructed to reproduce all bands around Fermi level. The two bands originate from two orbitals, including one Ni-3dx2-y2 orbital and one s-like pseudo-orbital located on the vacancy of oxygen atoms. Besides, the authors found that band inversion happens between Ni-3dxy states and conduction bands, resulting a pair of Dirac points along M-A in the Brillouin zone. In addition, to take the correlation effects of Ni 3d electrons into consideration, the authors performed the DFT + Gutzwiller calculation. The renormalized band structure is given in Fig.2. The results show that the half occupied 3dx2-y2 orbital have the smallest quasiparticle weight (about 0.12); namely, the 3dx2-y2 band width after renormalization is about 1/8 of DFT results. On the other hand, the Dirac points along M-A high symmetry line become closer to the Fermi level due to the band renormalization. In this work authors calculated the electronic structure, discussed topological properties and constructed a two-band model. These results will help people for the study of topology and superconductivity in nickelates.

Progress in electronic structure and topology in nickelates superconductors 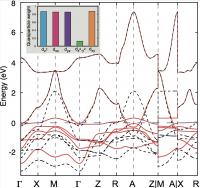