Tropical Depression 02E (TD2E) formed on May 31 and has not strengthened, likely due to its close proximity to the coast of southern Mexico. The National Hurricane Center (NHC) said that Tropical Depression 2E's "central convection has decreased somewhat, with the primary convection now in a large band over the southeastern semicircle."

The Atmospheric Infrared Sounder or AIRS instrument aboard NASA's Aqua satellite looked at Tropical Depression 2E in infrared light. The AIRS image was taken on June 1 at 7:41 UTC (3:41 a.m. EST) and showed some cloud top temperatures of thunderstorms near the center of circulation as cold as minus 63 degrees Fahrenheit (minus 53 degrees Celsius). NASA research has shown the storms with cloud tops that cold have the potential to generate heavy rainfall. The image shows that the northern quadrant containing those strong storms extended over southern Mexico.

The MODIS instrument aboard Aqua captured a visible image of Tropical Depression 2E at the same time as the AIRS instrument. The MODIS image clearly showed the northern extent of TD2E over the Mexican state of Oaxaca.

A Tropical Storm Warning is in effect for the Pacific coast of Mexico from Salina Cruz to Puerto Escondido.

NHC said "The depression is moving toward the north-northeast near 6 mph (9 kph) and this motion is expected to continue through Friday. On the forecast track, the center of the tropical cyclone is expected to move inland across the state of Oaxaca later today or tonight. Maximum sustained winds are near 35 mph (55 kph) with higher gusts."

There's a chance that the depression could still become a tropical storm before landfall.

After landfall, the system is expected to weaken and dissipate on Friday over the mountains if southeastern Mexico. 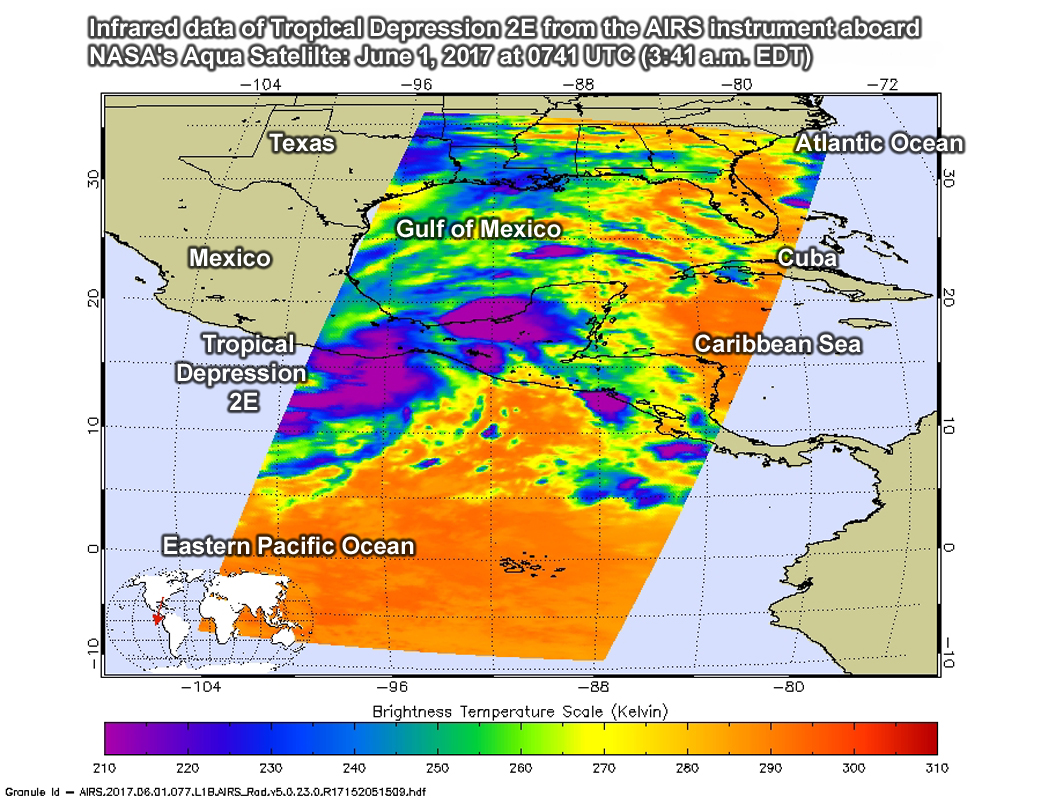