In a deception that likely has evolved over thousands of years, a caterpillar that feeds on corn leaves induces the plant to turn off its defenses against insect predators, allowing the caterpillar to eat more and grow faster, according to chemical ecologists in Penn State's College of Agricultural Sciences.

The finding is one more revelation about the myriad of chemical signals that pass between plants and insects that scientists at Penn State and around the world have been discovering in recent years. In this case, the agent of deceit is the caterpillar's feces, or "frass."

Plants are under constant threat of attack from herbivorous insects. Nearly 400,000 plant-eating insect species are known to live on 300,000 plant species. When these herbivores feed on plants, they not only cause mechanical damage but often deposit substances that can manipulate the plant's response to herbivory. These substances are analogous to the microbial-associated compounds that affect plant responses to pathogenic fungi or bacteria.

Fall armyworm larvae are voracious feeders on leaves in the confined whorls of corn plants, and by necessity the insects defecate nearby in the crevasses where the leaves meet the stalks. Copious amounts of frass accumulate in these structures and can remain there for a long period of time.

"It would be disadvantageous for the insect to deposit cues that could enhance plant defenses against it, so we investigated what chemical compounds in the frass were signaling the plant," said Dawn Luthe, professor of plant stress biology.

The research, recently published in the Journal of Chemical Ecology, may lead to the isolation of specific components of the frass that can be incorporated into a compound to be sprayed on crops. Such an organic, ecologically sustainable pesticide could enhance plant defenses against pathogens, Luthe said. Or perhaps plants may be genetically modified to incorporate the proteins from the frass to boost a crop's native resistance to pathogens.

Caterpillar frass is composed of molecules derived from the host plant, the insect itself and associated microbes, and hence it provides abundant cues that may alter plant defense responses, explained lead researcher Swayamjit Ray, who is a doctoral student in the intercollege Plant Biology program at Penn State. He pointed out that proteins from fall armyworm caterpillar frass initially induced wound-responsive defense genes in corn; however, a pathogenesis-related defense gene was induced shortly after.

The elicitation of pathogen defenses by frass proteins was correlated with increased herbivore growth and reduced fungal pathogen prevalence over time, the researchers report. These responses differ from the typical plant response to oral secretions of the fall armyworm caterpillar, and the results pave the way for identification of a protein molecule from the excretion of an herbivore that elicits pathogen-defense responses while suppressing herbivore defenses in plants.

To test their hypothesis, researchers applied frass extract to the leaves of corn plants and compared the growth of fall armyworm caterpillars that fed on the leaves to the growth of caterpillars that fed on untreated leaves. They also measured the performance of a fungal pathogen in response to frass treatment of corn leaves. They inoculated the leaves with spores of a fungus that causes leaf blight in corn (Cochliobolus heterostrophus).

"The plant perceives that it is being attacked by a pathogen and not an insect, so it turns on its defenses against pathogens, leaving the caterpillar free to continue feeding on the plant. It is an ecological strategy that has been perfected over thousands of years of evolution," Ray said.

The research was supported by the U.S. Department of Agriculture.

Caterpillar deceives corn plant into lowering defenses against it

Journal
Journal of Chemical Ecology
Funder
US Department of Agriculture 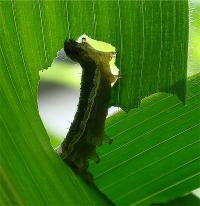 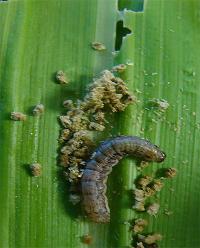