When they're not being the stars of various animated movies, penguins are playing an important role in evolutionary studies. Penguins are unique among modern birds in that they 'fly' through the water. Although flightless in air, penguins have a number of adaptations which allow them glide effortlessly through the water. And some of these adaptations are in an unlikely part of their anatomy - their brains. Recent finds of fossil penguins from 35 million year old sediments in Antarctica have begun to shed light on the changes in penguin brains that accompanied their transition to water.

"Comparing multiple species (extinct and living penguins and living birds that both fly and dive), in the way our study does, brings us closer to the answers of two major questions about penguin brain evolution: (1) what major morphological changes have occurred, (2) when did these changes occur?" said lead author Claudia Tambussi. The new finds, which are described in the latest issue of the Journal of Vertebrate Paleontology, include skulls which are so well-preserved that they could be CT-scanned to analyze their internal structure.

These scans revealed some interesting traits of these early penguins that speak to their transitional nature. Many of these findings have to do with the sensory abilities of these fossil species. For instance, one area, the Wulst, which is associated with complex visual functions, is enlarged. "The Antarctic fossils reveal that the neuroanatomy of penguins was still evolving roughly 30 million years after the loss of aerial flight, with trends such as the expansion of the Wulst and reduction of the olfactory bulbs still in progress", said co-author Daniel Ksepka.

In addition to the increase in visual complexity, and reduction in olfaction, findings in the ear region shed light on the head position and equilibrium-maintaining abilities of the fossil penguins. All together, the findings show that these early penguins had many of the adaptations of living forms, while having a few unique traits not seen in the modern ones. Not only that, but some of these adaptations are found in modern flying birds, attesting to penguins' unique mode of swimming.

Said Ksepka, "Penguins are considered flightless, but when it comes to wing-propelled diving they are essentially practicing underwater flight. The brain morphology reflects this as penguins retain an overall "flight-ready" brain."

OTHER EXPERTS NOT ASSOCIATED WITH STUDY: 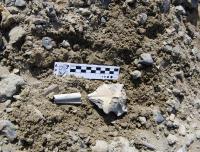