SALT LAKE CITY, March 24, 2009 — Concerns that terrorists could produce a new and particularly dangerous form of the explosive responsible for airport security screening of passengers' shoes and restrictions on liquids in carryon baggage are unfounded, scientists reported today.

Speaking here at the 237th National Meeting of the American Chemical Society, Gerard Harbison, Ph.D., and colleagues described using computer simulations to analyze a variety of potential peroxide-based explosives in the same chemical class as triacetone triperoxide (TATP). That powerful, easy-to-make explosive was used by the "shoe bomber," Richard Reid, in his failed attempt to blow up a transatlantic airline flight in 2001. TATP has also been used by suicide bombers in the Palestinian Intifada.

Harbison's team became intrigued by "Internet lore," reports circulating on the Web claiming creation of another explosive — tetracetone tetraperoxide (TeATeP) — which is reputedly a more lethal relative to TATP. Initially working on detection methods of peroxide explosives for the Defense Advanced Research Projects Agency, the group instead began to investigate the structure of TeATeP to evaluate likelihood of its use as a terrorist's weapon.

"Our analysis indicates that potentially new and destructive terrorist materials, which would tax our detection capabilities, may be too unstable for a practical synthesis," said Harbison, a chemist at the University of Nebraska-Lincoln. "We consider it unlikely that any of the previous syntheses were actually successful, and the Internet myths about TeATeP are nothing more than that. So the good news is basically this is something we don't have to worry about."

The group investigated 20 molecular structures of various acetone peroxide compounds and found that all substances larger than TATP are likely too sensitive to be used as weapons. "The energies we're seeing in the analysis are extreme enough," Harbison said, adding that a review of previous TeATeP synthesis reports raised many questions. "If you look at the actual literature on people who claim to have made TeATeP, it's very ambiguous. We think probably what happened when people thought they were making TeATeP was that they were actually making TATP."

This synthesis error is common and often fatal, Harbison said. When trying to make TATP, a less stable relative, diacetone diperoxide, often is created. "The nice thing about doing this on the computer is first it's safe, and our results are so close to what's been experimentally measured that we have a great deal of confidence with what we're doing," Harbison said. "We're really at the stage where we can evaluate threats — potential molecules that might be dangerous — and we can really make some sort of judgment about whether those molecules are going to present a hazard in the future. We can test things with computers at a level of reliability that's comparable to personally doing the synthesis and evaluating material yourself."

There's a lot of research that deals with known threats, Harbison said. But his groups' research focuses on the idea that emerging threats will always exist. "Presumably you'd like to anticipate the threats before they come along. We're now pushing it a little further and discussing potential threats.

"Using computational chemistry, we can narrow down the domain of potential hazards, things that aren't going to be on the horizon. I think we now know so much more about not just what works for improvised-explosive-device detection but also what doesn't work, and we don't have to try it out (experimentally). We did five years ago." 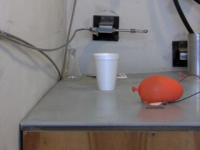