As much as 75 percent of global seed diversity in staple food crops is held and actively used by a wide range of small farmholders -- workers of less than three to seven acres -- with the rest in gene banks, according to a Penn State geographer.

Karl Zimmerer, professor of geography and his colleagues in the GeoSyntheSES (Geographic Synthesis for Social-Ecological Sustainability) lab including Steven Vanek, postdoctoral fellow, looked at new census data from 11 countries in Africa, Asia and Latin America and combined that data with field observations to develop an understanding of who is farming what and exactly where.

"These new surveys provide information that is much more detailed than what is available from the United Nations Food and Agriculture Organization," said Zimmerer. "The sources include information on Rwanda, Uganda, Kenya, Ethiopia, Nepal Cambodia, Thailand, Laos, Nicaragua, Colombia and Peru, and cover staple food crops like maize, rice, wheat, potatoes and even teff in Ethiopia."

What the census shows is that small farmers, in many cases women, are the ones preserving landraces of food crops. A landrace is a locally adapted, traditional variety of a domesticated species. Depending on the crop, farmers may plant anywhere from one to 15 different landraces. While the livelihoods of small land users are often precarious, these landraces provide vital farm and food resources.

"For maize, farmers plant one to three varieties because this crop readily outcrosses to form new varieties, producing too many new hybrids for the farmers to evaluate," said Zimmerer. "But the next farm over would probably plant different landraces, so some more diversity is available. Not all small farmers produce the high-agrobiodiversity landraces, but those that do are connected through networks of seed and knowledge exchanges. They're creating many new or so-called emergent agrobiodiversity systems rather than strictly relict or vestigial hold-overs of heirloom crops as is often depicted from the outside."

For crops like potatoes that outcross rarely, as many as 25 to 30 landraces could be planted in a farm plot. Rice, which outcrosses infrequently, shows a pattern similar to maize with few varieties in each field, but significant diversity across neighboring fields.

The importance of location types for the small farms goes beyond environmental factors. Zimmerer told attendees today (Feb. 13) at the annual meeting of the American Association for the Advancement of Science that socio-economic factors also play an increasing role.

Peri-urban locations, places where people's livelihoods depend significantly on urban space and activities, are becoming more important for preserving and actively using the diversity of food crops in all major regions of the world.

"There are now millions of people living in peri-urban environments and farming small holdings," said Zimmerer. "These are hybrid spaces socially and agriculturally, with influences from the modern city but where people might speak indigenous languages. They have good access to urban markets where restaurants prefer local foodstuffs, like maize and quinoa varieties in Peru."

On the other end of the spectrum from peri-urban areas are the marginal locations in remote rural areas. These areas often have declining populations so there are not enough growers and during drought or other disasters, there may not be sufficient seeds to replenish the base of diversity, which is usually very high.

In between peri-urban and marginal areas are a range of environments where small farmers grow crops and preserve diversity. Knowledge of potential problems in these areas and plans for responses to potential disruptions of agriculture are important to preserve diversity and improve food security.

"We're now determining a group of models that will enable us to describe the relationship on the one hand between level of high agrobiodiversity of seed and on the other hand farm size and other so-called land-system factors including climate variation," said Zimmerer. "This will be important in modeling the relationship between high agrobiodiversity land use to social and environmental factors."

Zimmerer has worked with researchers at universities in Peru and Bolivia and at the University of Paris on this project, and with small farmers around the world.

"Small holder systems are also surprisingly still present in the U.S. and Europe," said Zimmerer. "In fact, slightly larger numbers of small holders exist now in these areas than did previously."

Zimmerer and his colleagues are beginning investigations of agrobiodiversity and land-system factors in these countries as well. 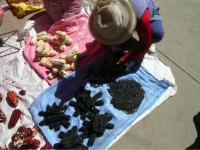