The sensor of some optical mice can be used to easily and cheaply detect counterfeit euros, according to a study published by researchers of the University of Lleida (UdL) in the scientific journal Sensors. Almost 80% of counterfeit coins discovered in Europe in 2008 were two-euro coins.

The sensor, incorporated in optical computer mice, is usually used to guide cursor movement, but can also be used as a counterfeit coin detector. This has been demonstrated by a prototype developed by computer engineers from the UdL, whose details can be consulted openly and for free in the scientific journal Sensors.

"We have implemented a counterfeit two-euro coin detection system by comparing patterns obtained with an optical mouse sensor", Marcel Tresanchez, one of the authors of the study, explains to SINC. According to the European Commission, 79% of counterfeit coins discovered in Europe in 2008 were two-euro coins.

The coin is placed in a positioning device and is rotated to detect forgeries. The sensor, situated a few millimetres away, is employed to capture images from the common face of the two-euro coins (all have a map of Europe engraved on one side, and a country-specific design on the other). The images are then compared with reference images obtained from genuine coins, using an algorithm also developed by the Catalan team.

"The same operation could be performed with a webcam, for example, but the advantage of these sensors is their small size, low cost and the angle of vision reduced to such an extent that the raised image of coins can easily be captured", Tresanchez points out.

The researcher does explain that not just any optical mouse sensor will work, as images must be captured in real time, with a minimum resolution of 15x15 pixels (the team used 30x30 pixels). It is also better to use an LED- or infrared-based sensor, and not laser technology, as these[sic] provide images that are too wide.

The results of the study show that this system, devised to complement forgery identification techniques, allows for the detection of counterfeit coins better than any layperson could, although at a similar level to that of an expert trained to do so.

The authors have also applied the same method to design an "encoder" or rotating codifier (which counts the angular movement of an axis) using the optical mouse sensor.

Counterfeit euros are detected with an optical mouse 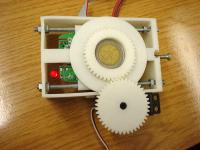