Researcher Steven Emslie encountered a puzzle at Cape Irizar, a rocky cape located just south of the Drygalski Ice Tongue on the Scott Coast, Ross Sea. He found both ancient and what appeared to be fresh remains of Adelie penguins, mostly of chicks, which frequently die and accumulate at these colonies. However, the "fresh" remains were puzzling, he says, because there are no records of an active penguin colony at this site since the first explorers (Robert Falcon Scott) in 1901-1903 came to the Ross Sea.

Emslie found abundant penguin chick bones scattered on the surface, along with guano stains, implying recent use of the site, but that wasn't possible, says Emslie. Some of the bones were complete chick carcasses with feathers, now falling apart from decay as at a modern colony, as well as intact mummies. Emslie and his colleagues collected some of these surface remains for further analysis and radiocarbon dating to try and figure out what was going on there.

The team found old pebble mounds scattered about the cape. These mounds are former nesting sites of Adélie penguins because they use pebbles to build their nests. When they abandon a site, the pebbles become scattered and stand out on the landscape, since they are all about the same size.

"We excavated into three of these mounds, using methods similar to archaeologists, to recover preserved tissues of penguin bone, feather, and eggshell, as well as hard parts of prey from the guano (fish bones, otoliths). The soil was very dry and dusty, just as I've found at other very old sites I've worked on in the Ross Sea, and also had abundant penguin remains in them. Overall, our sampling recovered a mixture of old and what appeared to be recent penguin remains implying multiple periods of occupation and abandonment of this cape over thousands of years. In all the years I have been doing this research in Antarctica, I've never seen a site quite like this."

The analyses reported in Emslie's recent paper published in Geology indicate at least three occupation periods of the cape by breeding penguins, with the last one ending at about 800 years ago. When that occupation ended, either due to increasing snow cover over the cape or other factors (the Little Ice Age was beginning about then too), the "fresh" remains on the surface were covered in snow and ice and preserved intact until recent exposure from snowmelt.

Global warming has increased the annual temperature in the Ross Sea by 1.5-2.0 °C since the 1980s, and satellite imagery over the past decade shows the cape gradually emerging from under the snow. Thus, says Emslie, "This recent snowmelt revealing long-preserved remains that were frozen and buried until now is the best explanation for the jumble of penguin remains of different ages that we found there."

The Ross Sea (Antarctica) is one of the most productive marine ecosystems in the Southern Ocean and supports nearly one million breeding pairs of Adélie penguins (Pygoscelis adeliae) annually. There also is a well-preserved record of abandoned penguin colonies that date from before the Last Glacial Maximum (>45,000 14C yr B.P.) through the Holocene. Cape Irizar is a rocky cape located just south of the Drygalski Ice Tongue on the Scott Coast. In January 2016, several abandoned Adélie penguin sites and abundant surface remains of penguin bones, feathers, and carcasses that appeared to be fresh were being exposed by melting snow and were sampled for radiocarbon analysis. The results indicate the "fresh" remains are actually ancient and that three periods of occupation by Adélie penguins are represented beginning ca. 5000 calibrated calendar (cal.) yr B.P., with the last occupation ending by ca. 800 cal. yr B.P. The presence of fresh-appearing remains on the surface that are actually ancient in age suggests that only recently has snowmelt exposed previously frozen carcasses and other remains for the first time in ~800 yr, allowing them to decay and appear fresh. Recent warming trends and historical satellite imagery (Landsat) showing decreasing snow cover on the cape since 2013 support this hypothesis. Increased δ13C values of penguin bone collagen further indicate a period of enhanced marine productivity during the penguin "optimum," a warm period at 4000-2000 cal. yr B.P., perhaps related to an expansion of the Terra Nova Bay polynya with calving events of the Drygalski Ice Tongue.

GEOLOGY articles are online at http://geology.geoscienceworld.org/content/early/recent. Representatives of the media may obtain complimentary articles by contacting Kea Giles at the e-mail address above. Please discuss articles of interest with the authors before publishing stories on their work, and please make reference to GEOLOGY in articles published. Non-media requests for articles may be directed to GSA Sales and Service, gsaservice@geosociety.org. https://www.geosociety.org 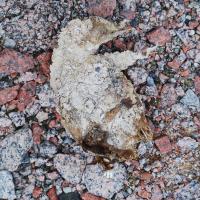