As issues like climate change, global warming, and renewable energy dominate the national conversation, it's easy to assume these topics are exclusive to the modern world. But a huge collaborative study in Science reveals that early humans across the entire globe were changing and impacting their environments as far back as 10,000 years ago.

"Through this crowdsourced data, we can see that there was global environmental impact by land use at least 3,000 years ago," says Gary Feinman, MacArthur Curator of Anthropology at the Field Museum and one of the study's 250 authors. "And that means that the idea of seeing human impact on the environment as a newer phenomenon is too focused on the recent past."

Feinman says that to understand our current climate crisis, we need to understand the history of humans altering their environments.

The study, led by Lucas Stephens of the University of Pennsylvania, is a part of a larger project called ArchaeoGLOBE, where online surveys are used to gather information from regional experts on how land use has changed over time in 146 different areas around the world. Land use can be anything from hunting and gathering to farming to grazing animals. And as it turns out, many of the ways ancient people used the land weren't as "leave-no-trace" as many have imagined.

"About 12,000 years ago, humans were mainly foraging, meaning they didn't interact with their environments as intensively as farmers generally do," says Feinman. "And now we see that 3,000 years ago, we have people doing really invasive farming in many parts of the globe."

Humans in these time periods began clearing out forests to plant food and domesticating plants and animals to make them dependent on human interaction. Early herders also changed their surroundings through land clearance and selective breeding. While these changes were at varying paces, the examples are now known to be widespread and can provide insight on how we came to degrade our relationship with the Earth and its natural resources.

"We saw an accelerated trajectory of environmental impact," says Ryan Williams, associate curator and head of anthropology at the Field Museum and co-author of the study. "While the rate at which the environment is currently changing is much more drastic, we see the effects that human impacts had on the Earth thousands of years ago."

The results, however, are more optimistic than they seem. Now that researchers know the beginnings of environmental impact, they can use this data to study what solutions ancient civilizations used to mitigate the negative effects of deforestation, water scarcity, and more.

In addition to pointing out the history behind what most assume is a recent phenomenon, the study is one of the first of its kind to operate on such a large scale. Use of online resources and professional connections helped the project span across the world. The emphasis now, however, is on the parts we often miss.

"We need to invest in these regions that haven't been as intensively studied," says Williams. "If we incentivize and create opportunities for researchers there then you can just imagine what the results of the next study like this could be."

For a long time, war, environment, transportation and colonization prevented researchers from being able to work together and share their findings about certain parts of the world. As a result, today's archaeologists are still adding to and growing the network of expertise in these regions.

"What really got me here was not so much the results, although I think that the results provide a foundation to support what many archeologists suspected," says Feinman. "But I think the most innovative aspect of this was the whole research design. To gather information from 250 scholars and to make sure that the whole world was covered, that's really something."

While today's climate change and environmental destruction are happening more quickly and on a far larger scale than the world has ever seen, Feinman notes that this study helps provide a historical context to today's problems.

"There's such a focus on how the present is different from the past in contemporary science. I think this study provides a check, a counter-weight to that, by showing that yes, there have been more accelerated changes in land use recently, but humans have been doing this for a long time. And the patterns start 3,000 years ago," says Feinman. "It shows that the problems we face today are very deep-rooted, and they are going to take more than simple solutions to solve. They cannot be ignored."

Ancient civilizations were already messing up the planet 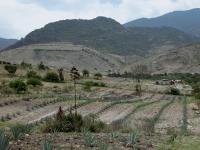