Humans continued to evolve significantly long after they were established in Europe, and interbred with Neandertals as they settled across the continent, according to new research published this week in the Proceedings of the National Academy of Sciences (PNAS) USA.

Professor Joao Zilhao of the University of Bristol, Professor Erik Trinkaus of Washington University and colleagues in Europe compared the features of an early modern human cranium found in the Peºtera cu Oase (the Cave with Bones) in southwestern Romania with other human samples from the period (the Late Pleistocene). Differences between the skulls suggest complex population dynamics as modern humans dispersed into Europe.

The different fragments of the reconstructed cranium – named Oase 2 – were found in a Late Pleistocene bone bed principally containing the remains of cave bears. They were recovered during a systematic excavation project directed by Professor Trinkaus and Professor Zilhao between 2003 and 2005.

Radiocarbon dating of the specimen produced only a minimum age (more than 35,000 years), but similarity in morphological traits with the Oase 1 human mandible – found in 2002 on the surface of the cave, adjacent to the excavation area, and dated to about 40,500 years ago – lead the team to conclude that the two fossils were the same age. These are the earliest modern human remains so far found in Europe and represent our best evidence of what the modern humans who first dispersed into Europe looked like.

By comparing it with other skulls, Professor Zilhao and colleagues found that Oase 2 had the same proportions as modern human crania and shared a number of modern human and/or non-Neandertal features.

However, there were some important differences: apparently independent features that are, at best, unusual for a modern human. These included frontal flattening, a fairly large juxtamastoid eminence and exceptionally large upper molars with unusual size progression which are found principally among the Neandertals.

Professor Zilhao said: "Such differences raise important questions about the evolutionary history of modern humans. They could be the result of evolutionary reversal or reflect incomplete palaeontological sampling of Middle Paleolithic human diversity.

"They could also reflect admixture with Neandertal populations as modern humans spread through western Eurasia. This mixture would have resulted in both archaic traits retained from the Neandertals and unique combinations of traits resulting from the blending of previously divergent gene pools.

"The ultimate resolution of these issues must await considerations of larger samples of European early modern humans and chronologically intervening specimens. But this fossil is a major addition to the growing body of fossil, genetic and archaeological evidence indicating significant levels of biological and cultural interaction between modern humans and the anatomically archaic populations (including the Neandertals) they met along the way as they spread from Africa into Eurasia."

It is apparent that the Oase 2 cranium indicates there was significant modern human morphological evolution since the early Upper Paleolithic, the researchers conclude. Oase 2 is 'modern' in its abundance of derived modern human features, but it remains 'nonmodern' in its complex constellation of archaic and modern features. 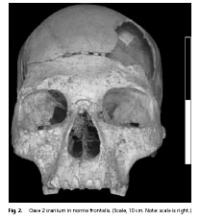 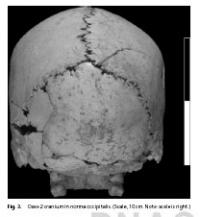