A team of researchers led by Professor Ikawa Masahito from the Research Institute for Microbial Diseases of Osaka University, in a joint research project with the University of Tsukuba and the Japan Aerospace Exploration Agency (JAXA), raised 12 male mice in the Japanese Experiment Module "Kibo" on the International Space Station (ISS) for 35 days, transporting them back safely from space. They revealed the world's first findings that male mice sent to outer space retained their reproductive ability after their return. Their research results were published in Scientific Reports.

The human body is affected by gravity changes, radiation, and psychological stress during a stay in outer space. Technical challenges, such as a lack of adequate animal housing facilities, prevented researchers from raising experimental mammals in space and returning them to Earth. Thus, the effect of a stay in outer space on reproductive organs and fertility was not well understood.

This project team developed a habitat cage unit (HCU) capable of being installed in the Centrifuge-equipped Biological Experiment Facility (CBEF) on the ISS. The mice were placed under artificial gravity or microgravity (by centrifugation). After their return to Earth, they were compared with a "ground control" raised on the ground for the same 35-day period. (Fig.1)

The joint team found that:

Prof. Ikawa says, "Because technological advances and the entry of private enterprises to space tourism have lowered the per person trip cost, the era where people can easily go to outer space is coming. Further analyses are necessary to examine the long-term effects of the environment in space on the male reproductive system; however, our research results will contribute to the accumulation of basic knowledge for humankind to expand the range of its activity to space." 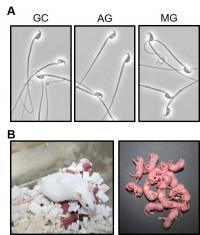