Durham, NC — Some birds that live near noisy sites can alter their songs to deal with din. But closely related species with similar songs may tweak their tunes in different ways, says a new study led by Clinton Francis of the National Evolutionary Synthesis Center in Durham, NC.

The study is part of a growing field that looks at noise pollution and its effects on wildlife. Honking horns, blaring sirens, and roaring machinery are particularly problematic for birds, Francis said.

Birds rely on songs to defend their territories and attract a mate. "When something interferes with their ability to hear each others' songs, it can lead to a communication breakdown," Francis explained. Noise can drown out other sounds in the environment too, like approaching predators, he added.

While some birds can cope with noise by altering their songs, less flexible birds may have to abandon noisy areas altogether. Can we predict which species will be able to adjust their songs, and which will be forced to flee?

Scientists would like to be able to predict which species will be most threatened by an increasingly noisy world, Francis said. To do that, it helps to know if closely related species respond similarly to noise.

To find out, Francis and his colleagues surveyed two closely related species with similar songs —the grey vireo and the plumbeous vireo — both living near natural gas extraction sites in the Bureau of Land Management's Rattlesnake Canyon Wildlife Area in northern New Mexico.

Since 2005, Francis has studied the effects of industrial-grade noise from natural gas wells on songbirds. The advantage of studying these sites, Francis notes, is they offer plenty of noise without the confounding factors that plague noise studies near roadways, such as pollution and collisions.

Some gas wells are coupled with noisy compressors that extract the gas and transport it through pipelines. The compressors roar and rumble day and night, 365 days a year at greater than 95 decibels —a noise level comparable to a motorcycle less than 50 feet away. "You need hearing protection if you're next to them," Francis said.

The researchers counted and recorded plumbeous vireos and grey vireos living near natural gas wells with noisy compressors. They then compared this data with song and survey data they collected from quiet wells without compressors. The results, published this week in Biology Letters, showed the two species are just as common in noisy sites as quiet ones, but they alter their songs in different ways.

Singing higher-pitched songs may make them easier to hear above the low frequencies typical of human-made noise, he added.

Both birds also changed the length of their songs, but in opposite ways. Whereas plumbeous vireo songs got shorter with increased background noise, grey vireo songs grew longer. "Grey vireo songs in noisy sites were nearly one and a half times as long as their counterparts in quiet sites," Francis said.

The results back up other studies showing some birds can cope with noise by altering their songs. But given the different modifications made by closely related species, it may be difficult to predict what these altered songs will sound like in diverse bird communities, Francis said.

"Closely related species may use different strategies to deal with noise," he said.

The researchers report their findings in the May 25 issue of Biology Letters.

Other authors of the study include Catherine Ortega of Fort Lewis College, and Alexander Cruz of the University of Colorado, Boulder.

Songbirds tweak their tunes in different ways to cope with clamor 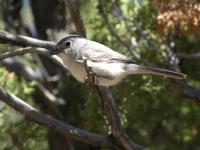