Cells, like many of us, fend off germs with cleaning products.

Researchers have discovered that a molecule made throughout much of the body wipes out invading bacteria like a detergent attacking an oily stain.

This killer cleaner, a protein known as APOL3, thwarts infections by dissolving bacterial membranes, Howard Hughes Medical Institute Investigator John MacMicking and his colleagues report in the journal Science on July 15, 2021. His team tested the protein on the food-poisoning bacteria Salmonella and other similar microbes.

The work offers new insight into how human cells defend themselves against infection, a process termed cell-autonomous immunity. While scientists knew that cells could attack bacterial membranes, this study uncovers what appears to be the first example of a protective intracellular protein with detergent-like action.

MacMicking hopes the findings could one day aid efforts to develop new treatments for infections. "This is a case where humans make their own antibiotic in the form a protein that acts like a detergent," says MacMicking, an immunologist at Yale University. "We can learn from that."

When it comes to defending the human body, the specialized cells of the immune system act as a crew of cellular bodyguards. But the same alarm signals that mobilize these cells can also activate average citizens. A signal called interferon gamma, for instance, cranks up protein production in non-immune cells that compose our tissues and organs. But scientists know little about how such proteins help cells fight pathogens.

The team found that the interferon gamma alarm signal could prevent Salmonella from taking over human cells, but the researchers didn't know which proteins came to the rescue. MacMicking's team screened more than 19,000 of the human cells' genes, looking for ones that might encode protective proteins. That work led the researchers to discover APOL3, which receives assistance from a second molecule, GBP1, and probably others. Using high-resolution microscopy and other techniques, the team pieced together the mechanism: GBP1 damages a bacterium's outer membrane, allowing APOL3 through so it can break apart the inner membrane -- the "coup de grace" that kills the bacterium, MacMicking says.

Like a laundry detergent, APOL3 possesses parts attracted to water and parts drawn to grease. Instead of removing dirt from fabric, these components remove chunks of the bacterial inner membrane, which is composed of greasy molecules called lipids.

This process must be highly selective, MacMicking says, since APOL3 needs to avoid attacking membranes of the human cell itself. The team found that APOL3 avoids cholesterol, a major constituent of cell membranes, and instead targets distinctive lipids favored by bacteria.

APOL3 appears likely to be in the toolbox of many cells. MacMicking's team showed it defends cells within the blood vessels and gut. Because APOL3 appears in a variety of body tissues, the scientists believe it offers wide protection.

The discovery of this detergent-like molecule within non-immune cells "adds more evidence to the view that any cell in the body can be part of the immune system," says Carl Nathan, who studies host-pathogen interactions at Weill Cornell Medical College, and who was not involved in this research. "It also adds a new example of one of the limited ways living things kill each other," he notes.

Whether perforating, poisoning, or starving a pathogen, the immune system has developed several methods for killing threatening cells. APOL3 joins the group of mechanisms already known to fatally break down membranes, Nathan says.

Researchers are still a long way from being able to apply this discovery to therapies for infections. But deciphering the body's defenses could give humanity new tools against microbes that are increasingly evolving ways to thwart conventional antibiotics. Dialing up cellular detergents and other devices the body uses to kill bacteria, for instance, could help supplement the natural immune response, MacMicking says.

Human cells harness power of detergents to wipe out bacteria 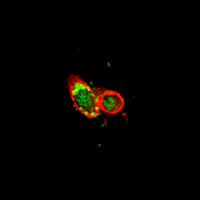