Climate change and habitat conversion to agriculture are working together to homogenize nature, indicates a study in the journal Global Change Biology led by the University of California, Davis.

While the individual impacts of climate change and habitat conversion on wildlife are well-recognized, little is known about how species respond to both stressors at once.

In northwest Costa Rica, the study's authors surveyed birds and plants at 120 sites that included rainforests, dry forests and farmland to determine how habitat conversion and climate-change-induced droughts affect tropical wildlife. They found that different bird species thrive in drier versus wetter areas of forests. In farmlands however, birds associated with dry sites were found everywhere, even in the wettest sites.

"Across Central and South America, we are seeing large areas being converted from native forest to agriculture, and droughts are becoming more frequent," said lead author Daniel Karp, an assistant professor in the UC Davis Department of Wildlife, Fish and Conservation Biology. "Both of these global pressures are favoring the same species and threatening the same species This means we may be losing biodiversity faster than we previously thought when we were studying climate change and habitat conversion individually."

Karp said the most vulnerable birds at the study sites were those in the wet forests, which include tropical birds like tanagers, manakins, and woodcreepers. He noted that birds in the agricultural sites -- such as blackbirds, doves, and sparrows -- were more similar to those found in the dry forest, where there is less of a tree canopy and more grass cover.

"Now that we know this, we know what to focus on from a conservation perspective," Karp said.

To help retain high levels of biodiversity, land managers could target for protection areas of wetter forests that expected to stay wet in the future. Conservation dollars could also focus on wet-forest species that are particularly sensitive to habitat conversion and climate change. Another option is to incentivize private landowners in wet regions to create or maintain patches of forests near or within their farms to better balance food production and biodiversity. 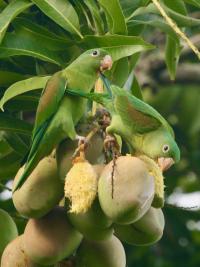