OAK RIDGE, Tenn., Jan. 22, 2018 - A team led by the Department of Energy's Oak Ridge National Laboratory has uncovered how certain soil microbes cope in a phosphorus-poor environment to survive in a tropical ecosystem. Their novel approach could be applied in other ecosystems to study various nutrient limitations and inform agriculture and terrestrial biosphere modeling.

Phosphorus is a critical nutrient for global biological processes, such as collecting the sun's energy during photosynthesis and degrading plant debris and soil organic matter. Most tropical ecosystems endure long-term weathering that leaches phosphorus from soil.

The ORNL-led team set out to discover how soil microbial communities respond to the lack of phosphorus and other nutrient deficiencies at the molecular level.

They collected soil samples at the Smithsonian Tropical Research Institute in the Republic of Panama, an experimental field site with phosphorus-rich plots and unfertilized control plots.

"This was the perfect place to test the optimal foraging theory, which is a model that helps predict an organism's behavior when searching for resources," said Chongle Pan, ORNL senior staff scientist and joint associate professor at the University of Tennessee. "We learned how this theory plays out when applied to microbial communities as they compete for nutrients."

The team analyzed the behaviors of many genes and proteins, and in the phosphorus-deficient, untreated soil, they found an increased number of genes responsible for producing phosphorus-acquiring enzymes. They also discovered more than 100 genes that work to pull phosphorus from phytate, which is a complex organic compound found in plant tissue.

"Finding so many genes to break apart and transport such a complex molecule tells us that microbes are hungry for phosphorus in untreated soil," said Melanie Mayes, an ORNL senior staff scientist who studies multi-scale environmental processes.

Conversely, she noted that when phosphorus was plentiful, more genes needed to acquire complex carbon compounds were present. "The microbial community prioritizes the breakdown of the most needed nutrients, focusing efforts on the most limiting element to balance their overall nutritional needs," she said.

The team ran each soil sample through a series of rigorous and comprehensive analyses. The DOE Joint Genome Institute conducted deep sequencing of the soils' metagenomes, or genetic material recovered directly from the soil. ORNL then used mass spectrometry and metaproteomics to identify more than 7,000 proteins in each sample.

These unique tools working together enabled one of the deepest proteogenomics studies done on soil microbial communities, according to Pan.

The ORNL-led team plans to continue their research to characterize the ecology and evolution of soil microbial communities in nutrient-poor environments, which has applications in agriculture and terrestrial biosphere modeling worldwide. Additionally, Mayes and her team are incorporating metagenomics information into nutrient cycling models under a DOE Early Career Research Program Award. 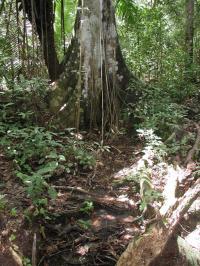