Salivary mucins, key components of mucus, actively protect the teeth from the cariogenic bacterium, Streptococcus mutans, according to research published ahead of print in Applied and Environmental Microbiology. The research suggests that bolstering native defenses might be a better way to fight dental caries than relying on exogenous materials, such as sealants and fluoride treatment, says first author Erica Shapiro Frenkel, of Harvard University, Cambridge, MA.

S. mutans attaches to teeth using sticky polymers that it produces, eventually forming a biofilm, a protected surface-associated bacterial community that is encased in secreted materials, says Frenkel. As S. mutans grows in the biofilm, it produces organic acids as metabolic byproducts that dissolve tooth enamel, which is the direct cause of cavities. "We focused on the effect of the salivary mucin, MUC5B on S. mutans attachment and biofilm formation because these are two key steps necessary for cavities to form," says Frenkel.

"We found that salivary mucins don't alter S. mutans' growth or lead to bacterial killing over 24 hours," says Frenkel. "Instead, they limit biofilm formation by keeping S. mutans suspended in the liquid medium. This is particularly significant for S. mutans because it only causes cavities when it is attached, or in a biofilm on the tooth's surface." She adds that the oral microbiome is better preserved when naturally occurring species aren't killed. "The ideal situation is to simply attenuate bacterial virulence," she says.

The study grew out of previous work in the investigators' laboratory showing that other types of mucins, such as porcine gastric mucins, had protective effects against common lung pathogens, says Frenkel. With this in mind, they suspected that salivary mucins would play a protective role, but they were not sure what that would be.

"Defects in mucin production have been linked to common diseases such as asthma, cystic fibrosis, and ulcerative colitis," says Frenkel. "There is increasing evidence that mucins aren't just part of the mucus for structure or physical protection, but that they play an active role in protecting the host from pathogens and maintaining a healthy microbial environment. We wanted to apply these emerging ideas to a disease model that is a widespread, global public health problem--cavities. We chose to study the interaction of MUC5B with Streptococcus mutans because it is the primary cavity-causing bacteria in the oral cavity."

The research makes a fundamental contribution to scientific understanding of host-microbe interactions, says principal investigator Katharina Ribbeck, of the Massachusetts Institute of Technology, Cambridge MA. "It is generating a paradigm shift from the textbook view of mucus as a simple catchall filter for particles, towards the understanding that mucus is a sophisticated bioactive material with powerful abilities to manipulate microbial behavior."

Applied and Environmental Microbiology is a publication of the American Society for Microbiology (ASM). The ASM is the largest single life science society, composed of over 39,000 scientists and health professionals. Its mission is to advance the microbiological sciences as a vehicle for understanding life processes and to apply and communicate this knowledge for the improvement of health and environmental and economic well-being worldwide. 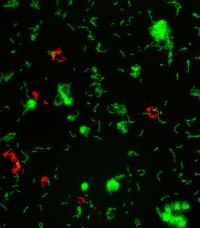