Tiny self-assembling transport networks, powered by nano-scale motors and controlled by DNA, have been developed by scientists at Oxford University and Warwick University.

The system can construct its own network of tracks spanning tens of micrometres in length, transport cargo across the network and even dismantle the tracks.

Researchers were inspired by the melanophore, used by fish cells to control their colour. Tracks in the network all come from a central point, like the spokes of a bicycle wheel. Motor proteins transport pigment around the network, either concentrating it in the centre or spreading it throughout the network. Concentrating pigment in the centre makes the cells lighter, as the surrounding space is left empty and transparent.

The system developed by the Oxford University team is very similar, and is built from DNA and a motor protein called kinesin. Powered by ATP fuel, kinesins move along the micro-tracks carrying control modules made from short strands of DNA. 'Assembler' nanobots are made with two kinesin proteins, allowing them to move tracks around to assemble the network, whereas the 'shuttles' only need one kinesin protein to travel along the tracks.

'DNA is an excellent building block for constructing synthetic molecular systems, as we can program it to do whatever we need,' said Adam Wollman, who conducted the research at Oxford University's Department of Physics. 'We design the chemical structures of the DNA strands to control how they interact with each other. The shuttles can be used to either carry cargo or deliver signals to tell other shuttles what to do.

'We first use assemblers to arrange the track into 'spokes', triggered by the introduction of ATP. We then send in shuttles with fluorescent green cargo which spread out across the track, covering it evenly. When we add more ATP, the shuttles all cluster in the centre of the track where the spokes meet. Next, we send signal shuttles along the tracks to tell the cargo-carrying shuttles to release the fluorescent cargo into the environment, where it disperses. We can also send shuttles programmed with 'dismantle' signals to the central hub, telling the tracks to break up.'

This demonstration used fluorescent green dyes as cargo, but the same methods could be applied to other compounds. As well as colour changes, spoke-like track systems could be used to speed up chemical reactions by bringing the necessary compounds together at the central hub. More broadly, using DNA to control motor proteins could enable the development of more sophisticated self-assembling systems for a wide variety of applications.

All aboard the nanotrain network 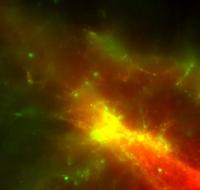