Robust data and genetic research are providing important evidence on a colony of wild African vervet monkeys that landed in Dania Beach more than 70 years ago and settled in a thick mangrove forest near the Fort Lauderdale-Hollywood International Airport in South Florida.

The non-native vervet monkey (Chlorocebus sabaeus) population living in this urban coastal region is well known and beloved among local residents and city officials; however, it is relatively unknown to primatologists. Despite wide public interest, there has been only one scientific study (early 1990s), suggesting that the monkeys escaped from a failed roadside zoo in the 1950s and 1970s. Until now, there was no confirmation about the species' identification, geographic origins, or introduction history.

A Florida Atlantic University team of scientists combined multiple methodological approaches to determine the species of Chlorocebus monkey in Dania Beach, where they came from, and their pathway of introduction. Results of the study, published in the journal Primates, provide critical baseline information to the scientific community about a little-known population of Chlorocebus monkeys that have survived for decades in a novel environment.

Through interviews, historical archives and popular media, FAU scientists traced the monkeys to an escape from the Dania Chimpanzee Farm in 1948. The facility acted as a zoo and also provided primates imported from Africa as research subjects in the development of the polio vaccine and other medical research. Historical archives suggest that the monkeys were caught in Sierra Leone. Scientists tested the hypothesis of West African origins using three genetic markers: one mitochondrial DNA gene (cytochrome b) and two fragments from the Y-chromosome, the sex-determining gene and the zinc-finger gene. Phylogenetic analyses confirmed that the Dania Beach monkeys are in fact Chlorocebus sabaeus (green monkey) and have West African origins.

The monkeys of Dania Beach were photographed to create a database of all individuals (36). Scientists recorded the following traits to help identify species of monkey: color of their fur; presence or absence of brow band; color of tail tip; and scrotum color of adult males. These attributes were then compared to all species qualitatively within the genus Chlorocebus to estimate study species using these traits.

"Our monkeys in Dania Beach have a golden-tipped tail and greenish-brown hair, lack a pronounced brow band around the face, and males have a pale blue scrotum. These phenotypic traits are characteristic of Chlorocebus sabaeus," said Deborah "Missy" Williams, Ph.D., lead author, Biological Sciences Department in FAU's Charles E. Schmidt College of Science, who leads the Dania Beach Vervet Project to conserve this population of monkeys and has been studying them for almost a decade. Williams conducted the study with Kate Detwiler, Ph.D., senior author and an associate professor in the Department of Anthropology in FAU's Dorothy F. Schmidt College of Arts and Letters.

This species is commonly referred to as a green monkey because of the color of its fur. Species within Chlorocebus have hair color ranging from greenish-brown to grayish olive with black faces, hands and feet. Males have a blue scrotum and red penis and perianus surrounded by white hair.

Green monkeys are endemic to West Africa, with a range from Senegal and west Guinea-Bissau into Ghana. They are the most widespread of the African monkeys and are habitat generalists, limited only by the availability of water and sleeping trees.

"Data from our study lays the groundwork for future studies to address new questions about the status of the population and how the monkeys have adapted to the urban and industrial environment of South Florida," said Detwiler. "The correct taxonomic identification and history of the introduced Dania Beach monkeys is important for community outreach and wildlife management, given the remarkable ability for Chlorocebus to thrive in most environments."

Study co-authors are Sandra M. Almanza, B.A., a recent graduate of FAU's Anthropology Department; and Itzel Sifuentes-Romero, Ph.D., an FAU post-doctoral fellow and a member of the FAU Brain Institute. 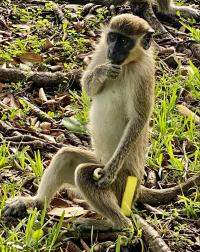