As the number and technology of humans has grown, their impact on the natural world now equals or exceeds those of natural processes, according to scientists.

Many researchers formally name this period of human-dominance of natural systems as the Anthropocene era, but there is a heated debate over whether this naming should take place and when the period began.

In a co-authored paper published online in the journal Anthropocene, University of Illinois at Chicago paleontologist Roy Plotnick argues that the fossil record of mammals will provide a clear signal of the Anthropocene.

He and Karen Koy of Missouri Western State University report that the number of humans and their animals greatly exceeds that of wild animals.

As an example, in the state of Michigan alone, humans and their animals compose about 96% of the total mass of animals. There are as many chickens as people in the state, and the same should be true in many places in the United States and the world, they say.

"The chance of a wild animal becoming part of the fossil record has become very small," said Plotnick, UIC professor of earth and environmental sciences and the paper's lead author. "Instead, the future mammal record will be mostly cows, pigs, sheep, goats, dogs, cats, etc., and people themselves."

While humans bury most of their dead in cemeteries and have for centuries, their activities have markedly changed how and where animals are buried.

These impacts include alterations in the distribution and properties of natural sites of preservation, associated with shifts in land use and climate change; the production of novel sites for preservation, such as landfills and cemeteries; and changes in the breakdown of animal and human carcasses.

Additionally, the use of large agricultural equipment and increased domestic animal density due to intensive animal farming likely increases the rate of and changes the kind of damage to bones, according to the paleontologists.

"Fossil mammals occur in caves, ancient lakebeds and river channels, and are usually only teeth and isolated bones," he said. "Animals that die on farms or in mass deaths due to disease often end up as complete corpses in trenches or landfills, far from water."

Consequently, the fossils from the world today will be unique in the Earth's history and unmistakable to paleontologists 100,000 years from now, according to the researchers.

"In the far future, the fossil record of today will have a huge number of complete hominid skeletons, all lined up in rows," Plotnick said.

Fossils of the future to mostly consist of humans, domestic animals 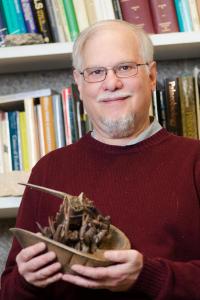