It's "hammerhead" time according aerial drone footage of blacktip sharks fleeing to shallow waters when confronted by a huge predator along the coast of southeast Florida. Footage from the drone provides the first evidence of adult blacktip sharks (Carcharhinus limbatus) using shallow waters as a refuge from the great hammerhead shark, (Sphyrna mokarran) - proving you "can't touch this."

Several juvenile shark species use shallow water nursery sites where the young can grow with a reduced risk of predation. However, prior to a study by Florida Atlantic University, no documentation was available to show that large adult sharks also swim in shallower waters to avoid predation.

The use of unmanned aerial vehicles (UAVs) enabled FAU scientists to unobtrusively observe and allow natural behaviors to be documented in the wild, providing insight into seldom-seen predator-prey interactions. Results of the study are published in the Journal Fish Biology.

The blacktip shark is both an agile predator of teleost fishes, cephalopods and crustaceans and a prey for larger sharks, such as the great hammerhead, which can get as big as 18 feet long. Despite their large size, hammerheads are often found in relatively shallow waters that are likely an important area for their feeding. Their prey typically includes stingrays, bony fishes and other sharks, so it is no surprise that they have been spotted in and around the blacktip shark aggregations, which provide an abundance of possible prey.

On three separate occasions, a UAV recorded footage of a hammerhead shark approaching an aggregation of blacktip sharks in the nearshore waters of Palm Beach County. The average length of the blacktips captured in the area is under 6 feet, which the researchers used to calibrate the scale in the video footage to estimate the distance from shore for these interactions. Based on this estimate, all videos were recorded less than 150 feet offshore of the beach, in water no more than waist deep.

"In two of the three videos, the hammerhead shark actively chased one or more blacktips toward the shore but was unsuccessful at capturing its prey," said Stephen Kajiura, Ph.D., senior author, a professor of biological sciences and director of the Elasmobranch Laboratory in FAU's Charles E. Schmidt College of Science. Kajiura co-authored the paper with his undergraduate student and lead author, Melanie D. Doan. "The chases ended with the hammerhead making a sharp turn away from its intended prey and the shore, back into deeper waters. The chasing events showed the hammerhead struggling as it experienced difficulty following the blacktips into the shallow waters."

Hammerheads are known to possess an exceptionally tall first dorsal fin, longer than their pectoral fins. Their large dorsal fin is proposed to generate lift when swimming on their side, instead of facilitating propulsion and precise turning, as seen in every other observed shark species. The caudal fin thrusts and propels the shark forward, but both the dorsal fin and upper lobe of the caudal fin are seen breaching the surface in each of the videos in the study.

"When the dorsal and caudal fins of hammerhead breach the surface, they are neither generating lift, providing thrust, nor helping to facilitate turning as efficiently as when they are completely submerged," said Kajiura. "The shallow water thus constrains the locomotion of the hammerhead, which provides the blacktip shark with a functional refuge because their smaller size allows them to continue to swim and maneuver effectively away from their larger predator."

Some of the footage analyzed in this study was generously provided by a local citizen scientist and film maker, Joshua Jorgensen. The increasing popularity of UAVs will likely lead to additional fortuitous observations that can further inform the understanding of behaviors that are difficult to observe or have been previously undocumented.

Funding for this study was provided by the Colgan Foundation. 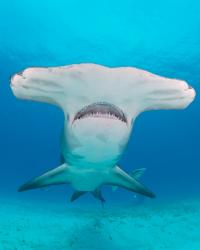