The most recent supernova in our Galaxy has been discovered by tracking the rapid expansion of its remains. This result, using NASA's Chandra X-ray Observatory and NRAO's Very Large Array (VLA), has implications for understanding how often supernovas explode in the Milky Way galaxy.

The supernova explosion occurred about 140 years ago, making it the most recent supernova in the Milky Way as measured in Earth's time frame. Previously, the last known galactic supernova occurred around 1680, based on studying the expansion of its remnant Cassiopeia A.

The recent supernova explosion was not seen in optical light about 140 years ago because it occurred close to the center of the Galaxy, and is embedded in a dense field of gas and dust. This made it about a trillion times fainter, in optical light, than an unobscured supernova. However, the supernova remnant it caused, G1.9+0.3, is now seen in X-ray and radio images.

"We can see some supernova explosions with optical telescopes across half of the Universe, but when they're in this murk we can miss them in our own cosmic backyard," said Stephen Reynolds of North Carolina State University, who led the Chandra study. "Fortunately, the expanding gas cloud from the explosion shines brightly in radio waves and X-rays for thousands of years. X-ray and radio telescopes can see through all that obscuration and show us what we've been missing."

Astronomers regularly observe supernovas in other galaxies like ours, and based on those rates, estimate that about three should explode every century in our Milky Way, although these estimates have large margins of error.

"If the supernova rate estimates are correct, there should be the remnants of about 10 supernova explosions that are younger than Cassiopeia A," said David Green of the University of Cambridge in the United Kingdom, who led the VLA study. "It's great to finally track one of them down."

The tracking of this source began in 1985 when astronomers, led by Green, used the VLA to identify G1.9+0.3 as the remnant of a supernova explosion near the center of our Galaxy. Based on its small size, it was thought to have resulted from a supernova that exploded about 400 to 1000 years ago.

Twenty two years later, Chandra observations of this object revealed that the remnant had expanded by a surprisingly large amount, about 16% since 1985. This indicates that the supernova remnant is much younger than previously thought.

The young age was confirmed when new radio observations from the VLA were made just within the past several weeks. This "apples to apples" comparison nails the age of the remnant to be about 140 years (less if it has been slowing down), making it the youngest on record in the Milky Way.

Finding such a recent, obscured supernova is a vital first step in making a better estimate of the supernova rate in our Galaxy. Knowing this rate is important because supernovas heat and redistribute large amounts of gas, pump large amounts of heavy elements out into their surroundings, and can trigger the formation of new stars, closing the cycle of stellar death and rebirth. The explosion may also leave behind, in addition to the expanding remnant, a central neutron star or black hole.

In addition to being a record holder for youth, G1.9+0.3 is of considerable interest for other reasons. The high expansion velocities and the extreme particle energies that have been generated are unprecedented and should stimulate deeper studies of this object with Chandra and the VLA.

"No other object in the Galaxy has properties like this," said Reynolds. "Finding G1.9+0.3 is extremely important for learning more about how some stars explode and what happens in the aftermath.

Scientists can also use it to probe the environment into which it exploded. At perhaps only a few thousand light years from the center of the Galaxy, it appears to be embedded in the dense environment near the Milky Way's supermassive black hole.

These results will appear in The Astrophysical Journal Letters. NASA's Marshall Space Flight Center, Huntsville, Ala., manages the Chandra program for the agency's Science Mission Directorate. The Smithsonian Astrophysical Observatory controls science and flight operations from the Chandra X-ray Center in Cambridge, Mass.

Discovery of most recent supernova in our galaxy 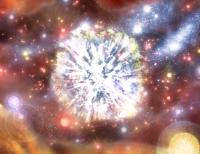 Illustration of Supernova near Galactic Center