Oil palm is neither the devil's work, nor a godsend to humanity. Its effects on its surroundings largely depends on case-specific circumstances. Those who ask to boycott all palm oil due to its contribution to deforestation should also consider boycotting coffee, chocolate and coconut if they wish to be consistent.

Are you for or against palm oil?

Ask anyone who has kept half an eye on the news the last couple of years, and they will most likely say "Against, obviously. The plantations destroy orangutan habitats, right? We've all seen the videos."

The environmental impacts of the palm oil industry are widely recognised. Unsurprisingly, many people, including many conservation pundits, consider oil palm a major evil. What is less widely recognized is the extent to which this industry has benefited people. Oil palm development, if well-planned and managed, can provide improved incomes and employment and generate investments in services and infrastructure. These alternative viewpoints fuel a polarised debate in which oil palm is alternatively seen as a gift from god or a crime against humanity.

According to science, it is neither.

Two leading scientists on forest conservation and management call for a more nuanced debate when it comes to palm oil and their plantations.

"Our key message is the following: The effects of oil palm, on the environment and on human society, are case-specific and largely dependent on circumstances. This must be recognised when conducting debate, and making management and consumer decisions," professor Douglas Sheil from the Norwegian University of Life Sciences (NMBU) says.

In a new scientific article, he and collaborator, professor Erik Meijaard from the University of Queensland, Australia and University of Kent, UK, explore questions related to the production and use of palm oil and other vegetable oils. Between them, they have more than 50 years of research experience on tropical forest conservation.

The only cause of deforestation?

Oil palm is widely reviled for causing large-scale deforestation in the species-rich tropics. With 18.7 million hectares of industrial-scale oil palm plantations in 2017, it is ranked 4th in terms of planted area for an oil crop, behind soy, rapeseed (or canola) and maize.

"Currently oil palm produces about 35% of global vegetable oils on less than 10% of the total land under oil crops," Sheil says.

"Overall, conversion to industrial scale oil palm development appears associated with less than 0.5% of global deforestation but surpasses 50% in specific regions such as Malaysian Borneo."

Locally, it can be environmentally devastating, but on a global scale, it is just one of many crops that should receive attention from environmentalists and government.

"But the attention these receive is hardly comparable to the scrutiny that is directed towards palm oil."

"There is no doubt that the impacts from oil palm plantings on the environment and biodiversity at local scales can be summed up as highly negative," Sheil says.

"But in terms of global outcomes, the debate changes."

It is imperative to assess to what extent the negative impacts can be reduced or avoided.

"For example, by planting palm oil, or other crops for that matter, in areas that are deforested already. It is better to utilise already degraded areas, than cutting down new ones."

This is already being done; it is just not widely acknowledged but needs to be encouraged.

"Another element that is insufficiently recognised, is that the negative consequences of the expansion of palm oil plantations in one location are potentially offset by, for example, reduced expansion of other oil crops elsewhere."

Who would deny a parent the opportunity of feeding their starving children? For some, palm oil is a way out of poverty when few other options exist. And economically, it is often a sensible option. Oil palms will grow in conditions that would defeat most other crops, and decades of successful breeding has increased yields dramatically.

However, palm oil is tainted with stories of corruption and disreputable practices. Its ability to produce considerable profits, even from areas where comparable options were absent, has fuelled a boom in speculation, opportunism and dubious practices. In locations with weak or corrupt institutions, this has parallels to the resource curse seen in some other high value commodities, such as mineral oil.

The immediate benefits of land clearance to develop oil palm can also be highly profitable encouraging some unscrupulous investors to access and clear large areas for the timber value on the promise of longer-term oil palm developments that never appear.

"Such scams have been common across Indonesia in recent decades, with both officials and communities duped into giving away their forest and timber for a broken promise," Meijaard says.

The authors emphasise that benefits from oil palm development likely depend much on the local context, such as variation between companies in how they engage with communities.

The world demands vegetable oils, and if palm oil is not available, other crops will replace it.

"A call for reductions in palm oil production will require an increase in other, higher latitude, oil crops, like soy, maize, sunflower and rapeseed," Meijaard says.

The largest areas allocated for the production of vegetable oils are in the USA, China and Brazil, although the predominant crops there, maize and soy beans, also produce non-oil products. Nevertheless, among the world's 20 largest producers of oil crops, only the tropical countries of Indonesia, Nigeria, and Malaysia have more than 10% of their land areas allocated to oil palm. A global shift away from palm oil would require more production of other oils.

"This would most likely benefit economies in the global North, where deforestation for agriculture took place a lot earlier than in the tropics."

The danger of extremism

"Boycotts against palm oil by consumers or consuming countries are a legitimate expression of social and environmental concerns," Meijaard says. H

e continues with warning that they punish innocent and guilty alike.

"Banning palm oil rather than seeking improved standards risks lowering rather than raising the practices."

If similar standards are not addressed to other crops and commodities, including those produced in consumer countries themselves, such boycotts can appear political, prejudiced and protectionist.

"We are already seeing palm oil producing countries protesting against what they see as Western double-standards."

"If we are not careful, there is a risk of driving them even further away."

"Stepping outside this rhetorical extremism is necessary if we seek resolution and pragmatic advances. An important question is how to plan, guide, and assess oil palm developments to foster the greatest benefits and least harm," Meijaard comments.

The authors recommend that a more complete accounting should consider not just the environmental aspects but the influence on poverty, hunger, and all the factors considered under the 17 UN-Sustainable Development Goals (SDGs).

"What is right and what is wrong depends on who you ask, and it is unlikely that there are clear universal answers as to how to best tackle contemporary global problems in a just and equitable manner, apart from providing informed choice."

"We have to bring nuance back into the debate," he concludes.

Frontiers in Forests and Global Change

Palm oil: Down from the conservation barricades and out of the rhetorical trenches 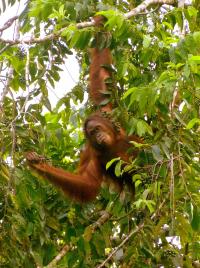