HOUSTON, Aug. 23, 2006 -- New research published by Rice University biologists in this week's issue of Nature finds that even the simplest of social creatures – single-celled amoebae – have the ability not only to recognize their own family members but also to selectively discriminate in favor of them.

The study provides further proof of the surprisingly sophisticated social behavior of microbes, which have been shown to exhibit levels of cooperation more typically associated with animals.

"By recognizing kin, a social microbe can direct altruistic behavior towards its relatives," said postdoctoral researcher Natasha Mehdiabadi, the lead author of the study.

Recognizing one's own family is a common trait among animals – be they chimpanzees, ground squirrels or paper wasps – and because kin recognition can strongly influence cooperative behaviors it can also significantly impact the social evolution of species.

While scientists have repeatedly documented cases of kin recognition, the Rice study is among the first to document the more sophisticated trait of kin discrimination in a social microorganism.

The new study is based on an examination of single-celled Dictyostelium purpureum, a common soil microbe that feeds on bacteria. In the wild, when food runs short, D. purpureum aggregate together by the thousands, forming first into long narrow slugs and then into hair-like fruiting bodies. Resembling miniature mushrooms, these fruiting bodies consist of both a freestanding stalk and the spores that sit atop it. Ultimately, the spores are carried away, usually on the legs of passing creatures, to start the life cycle all over again. But in order to disperse the spores, some of the colony's individuals must altruistically sacrifice themselves in order to make the stalk.

Mehdiabadi and others in the lab of Rice evolutionary biologists Joan Strassmann and David Queller sought to find out whether D. purpureum discriminate by preferentially directing this altruism toward their relatives.

The team collected wild strains of D. purpureum from the Houston Arboretum and took them back to the lab where they were cultured in dishes. In each of 14 experiments, a pair of strains were placed in a dish in equal proportion, and one of the strains in each pair was labeled with a fluorescent dye.

Food was withheld, causing the microbes in each dish to form dozens of slugs and fruiting bodies. Upon observing their social development, the team found that individual fruiting bodies contained predominantly one strain or the other.

"Our experiments ruled out potential differences in developmental timing and showed that these organisms preferentially associate with their own kin," said Strassmann, the Harry C. and Olga K. Wiess Professor in Natural Sciences, who also chairs Rice's Department of Ecology and Evolutionary Biology.

It's unclear how D. purpureum distinguishes relatives from non-relatives, but Mehdiabadi said the process likely relies on a genetic mechanism.

The research was supported by the National Science Foundation and the W.M. Keck Foundation.

Tight-knit family: Even microbes favor their own kin 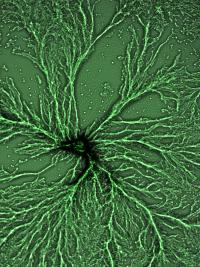