When society jumps on a bandwagon, even for a good cause, there may be unintended consequences. The unintended consequence of crop-based biofuels may be the loss of wildlife habitat, particularly that of the birds who call this country's grasslands home, say researchers from Michigan Technological University and The Nature Conservancy.

In a paper published in the October 2009 issue of the journal BioScience, David Flaspohler, Joseph Fargione and colleagues analyze the impacts on wildlife of the burgeoning conversion of grasslands to corn. They conclude that the ongoing conversion of grasslands to corn for ethanol production is posing a very real threat to the wildlife whose habitat is being transformed. One potential solution: Use diverse native prairie plants to produce bioenergy instead of a single agricultural crop like corn.

"There are ways to grow biofuel that are more benign," said Flaspohler, an associate professor in the School of Forest Resources and Environmental Science at Michigan Tech. "Our advice would be to think broadly and holistically about the approach you use to solve a problem and to carefully consider its potential long-term impacts."

The rapidly growing demand for corn ethanol, fueled by a government mandate to produce 136 billion liters of biofuel by 2022—more than 740 percent more than was produced in 2006—and federal subsidies to farmers to grow corn, is causing a land-use change on a scale not seen since virgin prairies were plowed and enormous swaths of the country's forests were first cut down to grow food crops, the researchers say.

"Bioenergy is the most land-intensive way to produce energy, so we need to consider the land use implications of our energy policies," said Fargione, lead scientist for The Nature Conservancy's North America Region.

Whether land used to grow corn for ethanol causes a loss of wildlife habitat depends on the type of land use it replaces. Most of the recent expansion in land planted to corn involves land previously used to grow other crops. But there is evidence that more and more land that had been enrolled in the federal Conservation Reserve Program (CRP) is also being converted to crop production.

CRP is a voluntary program that pays rent to landowners to convert their agricultural land to natural grasslands or tree cover, reducing soil erosion, improving water quality and benefiting wildlife. In September 2007, the amount of land enrolled in the CRP peaked at 36.8 million acres.. Just one month later, in October 2007, CRP lands had declined by 2.3 million acres. And the Food, Conservation and Energy Act of 2008 capped CRP land at 32 million acres by 2010.

CRP land has been shown to help native birds survive and thrive. CRP lands have added an estimated 2.1 million ducks annually to the fall flight over North America's prairies. On the other hand, converting CRP land to cropland threatens the grassland birds and mammals there, Flaspohler and Fargione's paper says. A study of the value of CRP land to grassland birds in North and South Dakota indicated that nearly two million birds of five species would be lost without the CRP in those two states.

Conversion of grassland to corn also has a potentially significant negative impact on freshwater ecosystems. Intact grasslands retain soil and nitrogen. Land planted continuously to corn releases significant amounts of nitrates to freshwater systems. When these nitrogen-laden waters real the Gulf of Mexico, they contribute to algal blooms, creating "dead zones" where low oxygen levels make it difficult for fish and other aquatic wildlife to survive. Soil draining off cropland increases sediment in fresh water, raising temperatures and degrading the habitat of fish such as trout.

What's the solution? There are at least two ways to produce bioenergy without destroying wildlife, habitat, the researchers say. One is to use biomass sources that don't require additional land, such as agricultural residues and other wastes from municipal, animal, food and forestry industries.

Another is to grow native perennials such as switchgrass and big bluestem. The natural diversity of prairie plants offers many benefits, including increased carbon storage in the soil, erosion control and the maintenance of insect diversity, which does double duty by providing food for birds and helping to pollinate nearby crops.

"Bioenergy can be produced in ways that provide multiple benefits to society, including energy production, carbon sequestration and wildlife habitat," Fargione said. "The Conservancy is working to implement on-the-ground demonstrations of grass-based energy systems that would increase the economic value of grasslands and provide an incentive for maintaining and extending grassland habitat."

One concern about using native prairie plants as bioenergy crops is a lower yield per acre planted. However, said Flaspohler, he and fellow Michigan Tech associate professor Chris Webster have collected plant productivity data from12 test fields in southern Wisconsin that should shed light on how field level plant species diversity affects the amount of biomass produced per year.

"We are looking at trade-offs between producing a commodity for use as bioenergy and maintaining important ecosystem services such as soil fertility, water quality, and wildlife habitat," Flaspohler noted. "It was by ignoring unintended consequences that we've now found ourselves highly dependent on a non-renewable fuel source (fossil fuels) that is contributing to climate change. With some foresight and with information on key trade-offs, I think we can make wiser decisions in the future."

In search of wildlife-friendly biofuels 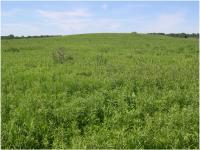 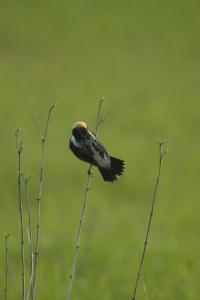