DURHAM, N.H. -- For the first time ever, scientists have documented a widespread extinction of bees that occurred 65 million years ago, concurrent with the massive event that wiped out land dinosaurs and many flowering plants. Their findings, published this week in the journal PLOS ONE, could shed light on the current decline in bee species.

Lead author Sandra Rehan, an assistant professor of biological sciences at UNH, worked with colleagues Michael Schwarz at Australia's Flinders University and Remko Leys at the South Australia Museum to model a mass extinction in bee group Xylocopinae, or carpenter bees, at the end of the Cretaceous and beginning of the Paleogene eras, known as the K-T boundary.

Previous studies have suggested a widespread extinction among flowering plants at the K-T boundary, and it's long been assumed that the bees who depended upon those plants would have met the same fate. Yet unlike the dinosaurs, "there is a relatively poor fossil record of bees," says Rehan, making the confirmation of such an extinction difficult.

Rehan and colleagues overcame the lack of fossil evidence for bees with a technique called molecular phylogenetics. Analyzing DNA sequences of four "tribes" of 230 species of carpenter bees from every continent except Antarctica for insight into evolutionary relationships, the researchers began to see patterns consistent with a mass extinction. Combining fossil records with the DNA analysis, the researchers could introduce time into the equation, learning not only how the bees are related but also how old they are.

"The data told us something major was happening in four different groups of bees at the same time," says Rehan, of UNH's College of Life Sciences and Agriculture. "And it happened to be the same time as the dinosaurs went extinct."

While much of Rehan's work involves behavioral observation of bees native to the northeast of North America, this research taps the computer-heavy bioinformatics side of her research, assembling genomic data to elucidate similarities and differences among the various species over time. Marrying observations from the field with genomic data, she says, paints a fuller picture of these bees' behaviors over time.

"If you could tell their whole story, maybe people would care more about protecting them," she says. Indeed, the findings of this study have important implications for today's concern about the loss in diversity of bees, a pivotal species for agriculture and biodiversity.

"Understanding extinctions and the effects of declines in the past can help us understand the pollinator decline and the global crisis in pollinators today," Rehan says.

The article, "First evidence for a massive extinction event affecting bees close to the K-T boundary," is published in the Oct. 23, 2013 edition of PLOS ONE (link will become active once the embargo lifts). Funding for the research was provided by Endeavour Research Fellowships (Rehan) and Australian Research Council Discovery Grants (Schwarz).

The University of New Hampshire, founded in 1866, is a world-class public research university with the feel of a New England liberal arts college. A land, sea, and space-grant university, UNH is the state's flagship public institution, enrolling 12,300 undergraduate and 2,200 graduate students. 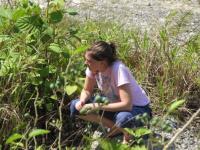