RIVERSIDE, Calif. - Scientists at the University of California, Riverside have discovered that a strain of beneficial nitrogen-fixing bacteria has spread across California, demonstrating that beneficial bacteria can share some of the same features that are characteristic of pathogens.

The bacteria, called Bradyrhizobium, form tumor-like nodules on the roots of plants and are able to 'fix' nitrogen by breaking it down and rendering it into forms that plants can easily metabolize.

"Bacterial epidemics are commonplace, but except for notable pathogens we rarely understand what drives bacteria to spread among populations," said Joel Sachs, an associate professor of biology, who led the research effort. "Why some strains spread epidemically while others do not is not well understood."

Sachs and his team gathered genetic data from more than 350 bacterial nodules that were cultured from host plants across California. The host plant the researchers focused on was Acmispon strigosus, a common herb native to the southwestern United States that exhibits a near continuous range across California.

They found that a handful of bacterial strains dominate local populations of plants and have spread across the state.

"These bacteria have genomes that are roughly divided into two regions," Sachs explained. "One region, the chromosome, is mostly expressed during free-living existence when the bacteria are in the soil. The other region, called the 'symbiosis island,' is important during symbiotic interactions with the plant host--such as plant infection and nitrogen fixation. We found that the epidemic was solely driven by the chromosome region of the bacterial genome."

Sachs noted that the epidemic strains are highly successful in the soil and in competition to infect plants, explaining perhaps why they persist and dominate in many different places.

"The spread could have occurred via motility in the soil or via windstorms," Sachs said.

Study results appear today in the Proceedings of the Royal Society B.

"The genetic and carbon usage data combined with the genetic data suggest that one or two strains dominate the state of California because they are able to be successful in the soil," Sachs said. "The genetic region of the bacterium that is active in the soil is the only region that has signatures of epidemic spread."

Bradyrhizobium are important symbionts for many plants, especially legumes. They are also critical symbionts for important crops, including soybeans, peanuts, and cowpeas, and are the principle source of nitrogen nutrients for all living organisms on earth.

According to Sachs, harnessing native epidemics, such as the one seen in Bradyrhizobium, could be a boon to biofertilizer development.

"For decades, agronomists have attempted to apply these bacteria as biofertilizers," he said. "The idea of using these bacteria to enhance crop growth makes a great deal of sense since the Bradyrhizobium can provide free nitrogen to the plant in a sustainable and natural manner. In contrast, chemical fertilization is costly in terms of fossil fuels and is also a major pollutant."

He cautioned, though, that attempts to use the bacteria as biofertilizers have failed because inoculated strains cannot compete with native bacteria in the soil and end up not successfully infecting the plant.

"The epidemic Bradyrhizobium strains we discovered can survive and dominate in a variety of soils, and have key features that one would want in a biofertilizer," he said.

Sachs was joined in the research by UC Riverside's Amanda C. Hollowell, John U. Regus, Kelsey A. Gano-Cohen, Roxanne Bantay, Andrew Bernado, and Devora Moore; and David Turissini, a former UCR postdoctoral researcher now at the University of North Carolina. Hollowell, the first author of the research paper, Regus, and Gano-Cohen are doctoral students in Sachs's lab. Bantay is a technician in the lab, while Bernado, Moore and Pham are undergraduate apprentices.

The research was funded by grants from the National Science Foundation to Sachs, as well as a scholarship and fellowship to Hollowell.

Bacteria beneficial to plants have spread across California 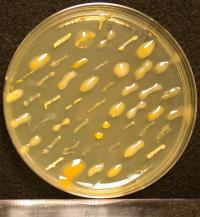